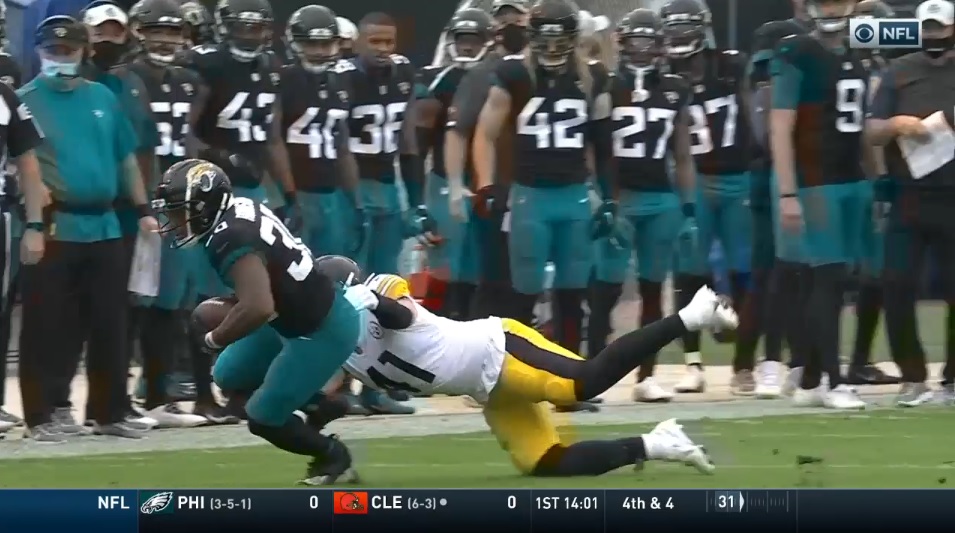 Another week marked another strong tackling performance for the top-ranked Pittsburgh Steelers’ defense.

On the road against the Jacksonville Jaguars Sunday in a game filled with rain showers, the Steelers turned in another good performance defensively, specifically in the tackling performance.

It’s a bit concerning to see three defensive backs that are seeing quite a bit of time right now miss tackles, as is the replacement for Devin Bush turning in another tough week in the tackling department.

That’s mostly nitpicking at this point though because the defense didn’t miss many tackles, took the football away and really closed out the game in style on the road.

Let’s get to some misses.

This was Spillane’s first miss of the day and it came early on in the first drive of the game for the Jaguars.

He has to work through traffic early on this rep to get into the flat to cover rookie running back James Robinson. Where he messes up is going for the breakup, rather than ensuring he corrals Robinson and get him on the ground.

With the miss on Robinson, the Jaguars’ standout rookie picked up the first down and a handful of extra yards on a drive that ended in a field goal.

While Steven Nelson had a strong day in coverage, he had a rough sequence here in the second quarter.

One play prior – a run in which Robinson ripped off 18 yards over right tackle – Nelson got into a skirmish with a Jags player, resulting in an additional 15 yards to midfield.

The very next play, Nelson does a good job coming downhill in run support against Robinson on the left side, but he ducks his head, allowing Robinson to hurdle him, leading to Nelson hearing about it from the Jags’ sideline.

Nelson had the last laugh though.

Offensively, the Steelers had a great day in the missed tackles department, rolling up the second-best mark of the season with 15 forced misses on Sunday at Jacksonville. That means the Steelers won the tackle battle with a mark of +10, tying for the best mark of the year.

The run game had been rough for three weeks coming into the Week 11 game. While the Jaguars’ defense isn’t good against the run, James Conner created quite a bit on Sunday, forcing a game-high eight missed tackles.

Conner started fast on Sunday, forcing a pair of misses on the Steelers’ second drive of the game.

Here on carry off right tackle, Conner does a great job setting up rookie cornerback Chris Claybooks with a head fake outside before bursting back inside, powering through an arm tackle attempt to pick up some additional yardage.

This is probably my favorite run by Conner this season, not even joking.

For all the naysayers of Conner who say he can’t create on his own, Conner turned this disaster of a play into a two-yard gain, forcing two defenders to miss in the backfield before turning the corner.

This should have been a loss of five yards. Instead, Conner forces one miss quickly on cornerback DJ Hayden, and then forces Claybrooks to miss again before turning the corner. Take your hat off and hand it to Conner for this run.

On fourth and short, Conner again made a man miss in the backfield, turning the corner to pick up 17 yards to extend the drive.

The Steelers are outnumbered up front, leaving Jags safety Jarrod Wilson free. Conner does a phenomenal job bouncing this, forcing the miss from Wilson in short yardage to pick up a splash play.