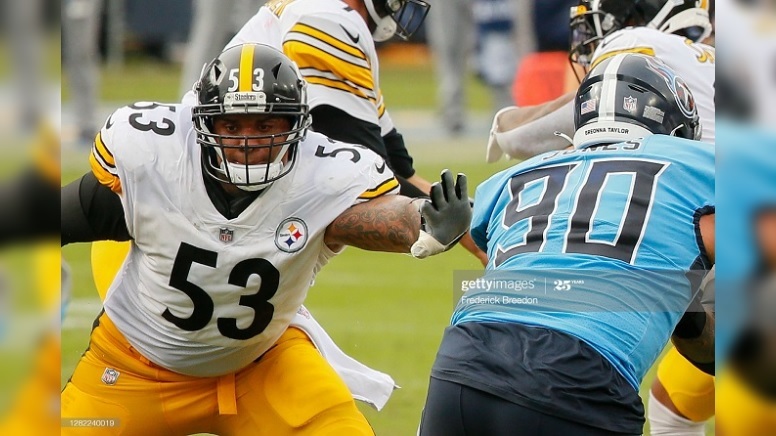 In my last article, which examined how well Pittsburgh Steelers quarterback Ben Roethlisberger and the offensive line handled the Baltimore Ravens pass rush, I was quite surprised to see in the analytics that Maurkice Pouncey was one of the lowest-rated blockers in the league during Week 8. Because of this, I wanted to dig a tad deeper and see where he stood against the rest of the NFL over the course of the season thus far.

The results are not much more encouraging. 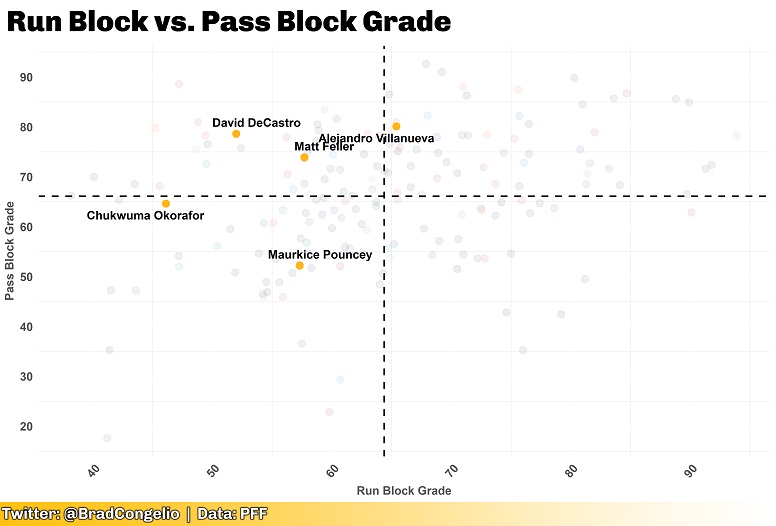 According to the advanced metrics from Pro Football Focus, Pouncey is one of the lowest rating offensive linemen among those with at least 200 offensive snaps. For sure, the Steelers offense isn’t exactly a finely-tuned machine, as it ranks just 20th in overall rushing and 26th in overall passing yards. However, the offensive line has only let Roethlisberger get sacked ten times so far this season, one of the best performances in the NFL. And, at an average of 4.1 yards per carry, it is not like Pouncey and other members of the offensive line are getting pushed around on rushing plays.

So, again: why does PFF consider Pouncey a low-tier offensive lineman despite the Steelers offense being effective?

To try to answer that, we need to look at two things. First, how does PFF score individual players? And, second, how does PFF’s rating methodology match with what we can examine with in-game footage?

Answering the first questions is quite simple. PFF ranks each player, on every play, on an individual basis. In short, every player is rated on every play between the scores of -2 and 2, with the movement being done in 0.5 increments. Within those individual play rankings, a score of zero is considered the average grade for a player – meaning, a score wherein the player did as expected, no more or no less. A more significant impact on the play means a higher score, while underperforming results in a lower play-by-play score.

To examine this in-game footage, let’s use Pouncey’s performance in the New York Giants game, where he supposedly had his worst run-blocking outing of the season, with a PFF rating of 41.2, meaning moderately below average. By using the nflfastR package in the R programming language, one is able to list the expected points added (EPA) for every rushing play from that game and then match the play up to NFL Game Pass footage to get a closer look at whether Pouncey deserved the 41.2 rating from PFF.

To start the process, I’ve sorted the individual play EPA from lowest to highest, meaning we will examine those running plays that had negative EPA, meaning they were least likely to assist Pittsburgh in ultimately scoring a touchdown. A reasonable assumption can be made that a negative EPA on rushing plays will result in negative run-blocking ratings from PFF for offensive linemen.

Early in the 4th quarter against the Giants, Roethlisberger handed the ball off to Benny Snell for a two-yard loss. The resulting EPA was -1.88. However, Pouncey certainly passes the eyeball test on the play. He successfully cleared his assignment. No reason for a negative rating on the play.

Pouncey easily won his assignment on this play, eventually moving to the second-level in an attempt to clear even more room for Conner on this play, which ended with an EPA of -0.87. There is nothing in the video that indicates Pouncey deserves a poor rating from PFF, as he did his job. In fact, the play ended because an unblocked cornerback had an easy entry into the backfield. There is obviously nothing Pouncey could do about that.

Facing a first-and-10 in the 1st quarter, Roethlisberger handed the ball off to Conner who was stopped just short of the line of scrimmage for a one-yard loss. In the video, Pouncey double teams his assignment but eventually loses control of the battle allowing his assignment to have an impact, however insignificant it actually was, on the play. This could be an example of a PFF rating leaning more towards a negative score, as opposed to remaining neutral like in the first video.

To save some time, I will say this: I have watched every negative EPA rushing play from the Giants game. There is nothing that indicates why Pouncey is receiving such poor ratings from PFF. As well, the positive EPA plays all showed Pouncey doing his job and doing it well.

Which leaves me to question again: what is PFF seeing?

To that end, I think the answer is in the numbers. Because PFF rates players on their individual contributions on each play, it is perhaps important to look at the rushing directions for the Steelers thus far in the season.

So far this season, Pittsburgh has attempted to run 200 times. Of those 200 play calls, offensive coordinator Randy Fichtner has only called running plays “up the middle” – meaning, either to the left or right of Pouncey – 50 times. That means Pouncey has been in the middle of the action just 25-percent of the time on running plays.

The 25-percent statistic starts to bridge the gaps between what we see on film regarding Pouncey’s performance and how PFF rates him. It seems that, because PFF uses the numeric zero as the ‘average’ or ‘expected’ performance of a player, that Pouncey has not had much in the way of an opportunity to push that numeric to the positive. In other words, his PFF rating is based on a much smaller sampling of work compared to the larger body of rushing plays run by the Steelers, thus creating larger swings in his rating.

If, for example, Fichtner starts calling more running plays up the gut, allowing Pouncey to be the lead blocker and having a more significant impact on the play, it is likely we see Pouncey’s rating start to rebound towards the positive.

All in all, there seems to be no need for Steelers fans to panic about Pouncey’s PFF rating, specifically his ability to block for running backs. A quick examination of game footage indicates that Pouncey is getting the job done. It seems that Pouncey’s rating is more of an abnormality as the Steelers prefer outside rushing, as opposed to a smash-mouth, up-the-middle type of running game which would ultimately allow Pouncey to increase his rating because of his more significant impact on each play.