All 32 teams have now played at least seven games and so with that, it’s time to check in on some ANY/A stats and start making a few predictions as it relates to which teams now have a legitimate shot at winning this year’s Super Bowl based on the history of the statistic over the course of the last 20 seasons.

ANY/A – adjusted net yards per passing attempt: (pass yards + 20*(pass TD) – 45*(interceptions thrown) – sack yards)/(passing attempts + sacks). See AY/A. Note that we are now using 20 yards per TD instead of 10, because of research by Chase Stuart at the p-f-r blog.

In the last 20 seasons, only once has a team gone on to win the Super Bowl after posting a negative ANY/A differential through seven games played. That team was the 2001 New England Patriots (-0.66).

The offensive ANY/A stat for Super Bowl winning teams from the last 20 seasons is a lot less predictive and it has a much higher variance – 4.41 for the Ravens in 2000 through seven games played and 9.27 for the Kansas City Chiefs in 2019 through seven games played. In short, defensive ANY/A, along with ANY/A differential, is a lot more important to focus on. Besides, we all know that good pass defense is what ultimately wins championships, right?

So, now that we have the historical qualifiers out of the way, let’s apply them to this year’s stats of all 32 teams through their first seven games played this season. Below are the stats from all 32 teams ranked from best ANY/A differential to worst. 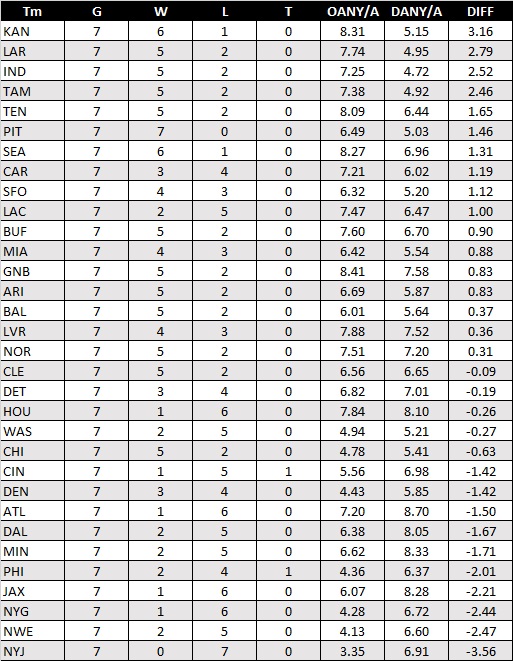 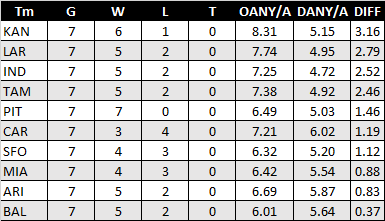