The Pittsburgh Steelers enter Week 10 with an 8-0 record. They’re now preparing to play their third divisional game of the season with this one being against the Cincinnati Bengals. A win on Sunday guarantees the Steelers will have a winning record in 2020 and will also likely put them just a few wins away from locking up a playoff spot. In short, this 2020 season is going very well for the Steelers and with that, a deep playoff run should be expected. Should a seventh Lombardi Trophy be expected as well? Historical stats show that they now have a one in eight shot at winning this year’s Super Bowl.

A deep look at the Steelers ANY/A stats through eight games played finds a team with a positive differential number of 1.74 and a defensive ANY/A number of 5.01. All things considered, both of those numbers are quite good in today’s NFL and it puts them well on pace to make a deep run at a seventh Lombardi Trophy.

With all teams now having played at least eight games in 2020, we can sort and rank ANY/A numbers from a historical perspective and make strong predictions as to which teams have a great shot at winning Super Bowl LV at Raymond James Stadium in Tampa, FL on February 7, 2021.

From 2000-2019, no team has won a Super Bowl with a negative ANY/A DIFF after eight games played and a DANY/A greater than 6.10. If you trust those numbers will stay true in 2020, below are the eight teams vying to win the Super Bowl this year. That list of eight teams obviously includes the Steelers. Not surprisingly, the defending Super Bowl champions, the Kanas City Chiefs, are also on that list of eight teams. In total, five AFC teams make up the eight with the other three being NFC teams.

Noticeably missing from the list of teams that the ANY/A stats say can possibly win the Super Bowl this season are three NFC teams, the Green Bay Packers, Seattle Seahawks, and New Orleans Saints. The DANY/A numbers those three teams have posted through eight games played is the reason why each missed the cut. Of those three teams, however, the Saints, who destroyed the Tampa Bay Buccaneers on the road this past week, has the best chance at bucking the trend.

Of those eight teams that made the cut, you’d be hard pressed to find anyone who would give the Miami Dolphins a chance of winning it all this season. Additionally, I must point out that the Arizona Cardinals and Carolina Panthers both just missed making the 6.10 DANY/A cut. With that said, I’m betting there’s not too many people who give either of those two teams a legitimate chance when it comes to winning the Super Bowl this year.

Just for fun, below is a look at the 11 teams that made the statically ANY/A cut after eight games played last season. It’s funny to look back and see that the Steelers were one of the 11 teams with the lowest differential of the bunch. If only quarterback Ben Roethlisberger wouldn’t have gotten hurt last season. Sigh!

Obviously, historical stats are just that, historical stats, and that means it’s not guaranteed that one of the eight teams listed above will go on to win this year’s Super Bowl. Let’s face it, there’s still an entire half of a season left to be played and thus a lot can happen between now and February 7.

I’ve now posted about the historical aspect of ANY/A stats two weeks in a row so it’s time for me to back away from that topic for a few weeks. I will, however, be back with another look at the stat and the historical and predictability of it after all teams have played 10 games. By then, we should be able to get a good idea as to what four teams might end up playing in the conference championship games in January. 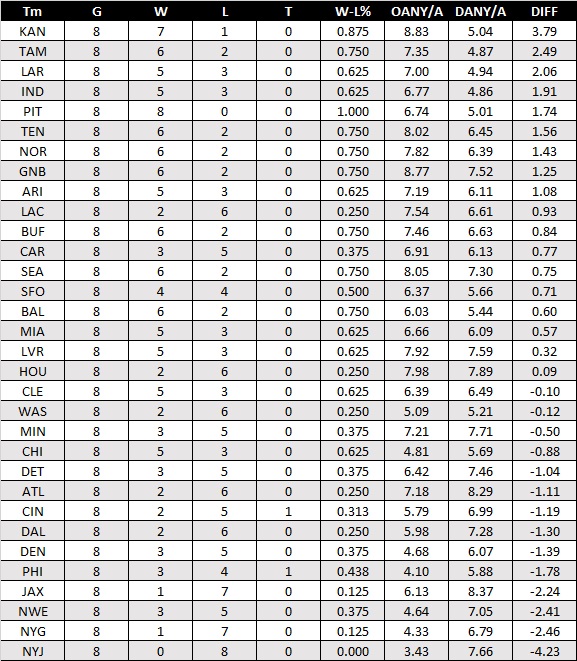