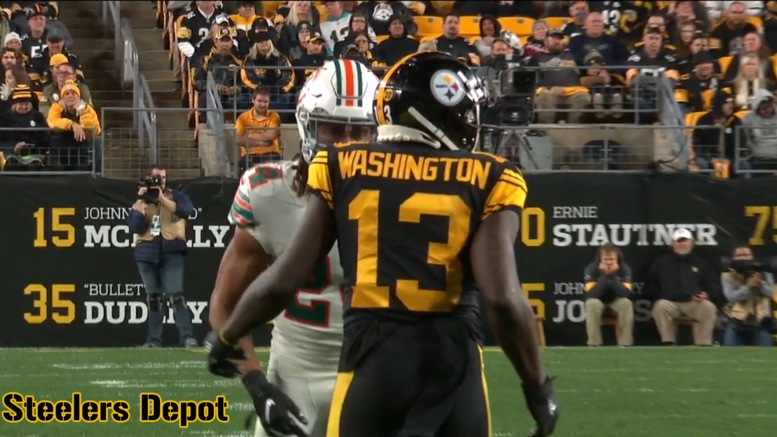 Reasoning: James Washington played just 10 snaps for the Steelers on Sunday, which is the lowest in his entire career in games in which he was active. This follows a week in which he played only 18 snaps. He has been targeted just twice in the past two weeks with zero receptions as Chase Claypool and even Ray-Ray McCloud have emerged as seemingly preferred options, at least temporarily.

Following the Tennessee Titans game, head coach Mike Tomlin was asked about James Washington and the fact that he played sparsely just a week after having a four-catch, 68-yard, 1-touchdown game against the Cleveland Browns. “I’m sure if called upon next week, he’ll be the guy that we’ll be talking about”, he said.

Well, he wasn’t called upon, and we’re not talking about him, except to mention that he appears to have fallen out of the meat of the rotation behind JuJu Smith-Schuster, Diontae Johnson, Chase Claypool, and relative newcomer Ray-Ray McCloud, who seemingly made the team initially only as a kick returner but has increased his value week by week.

Considering that his sharp decrease in playing time coincided with his having his best game of the season, it can’t be attributed to purely performance issues. It also notably coincided with Diontae Johnson’s return to health, and in the interim, Claypool emerged, with McCloud getting opportunities as well.

It will be interesting to see if Tomlin addresses Washington again today after his 10-snap, 1-target day. It was insinuated that McCloud was used as the fourth receiver against the Ravens in the second half because it was a more favorable matchup.

Will Washington be a more favorable matchup for the Steelers against the Dallas Cowboys in their next game? Are he and McCloud going to be competing for snaps? It’s clear that Claypool has already jumped into the top three receivers, but is Washington really going to be reduced to seeing 10-20 snaps per game? He never played fewer than 26 snaps in any game last season.