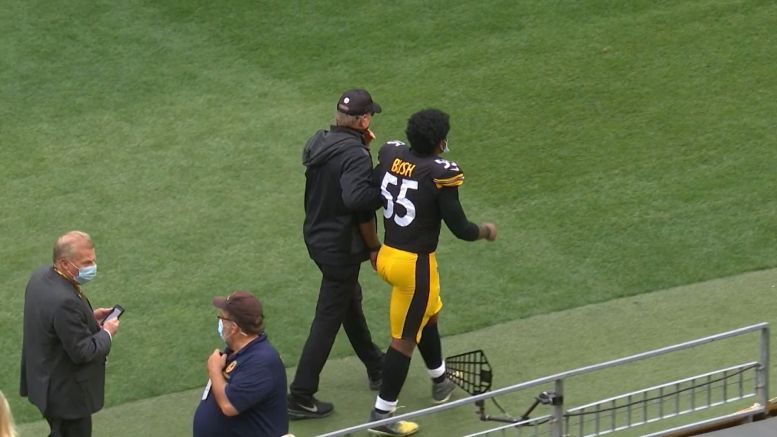 Although I’m sure it applies to every single team in the league, there is one thing about which Devin Bush is fortunate in having his torn ACL occur with the Pittsburgh Steelers, and that is the fact that he has ample direct resources, teammates to whom he can relate about the injury process.

Along the defensive line just in front of him, he has two high-profile and high-performing beasts who have come back in a big way from pectoral injuries, Cameron Heyward going on to take his game to another level for the past four years running since his injury. Stephon Tuitt is the most recent, picking up where he left off last year from his own pectoral injury.

“That’s our job, to play for the organization and to go out there week in and week out to do what we love, what we’re passionate about”, Tuitt said about players’ connection to the game. “And when we’re not able to do it because of injuries, it’s a toll”.

“He’s going through it. He’s going to have to go through a recovery journey”, he said of Bush”, and we all are gonna be here to support him. And if he ever needs us for anything, we’ll be there to be able to guide him and give him some of our resources, so when he comes back next year, he comes back stronger and faster”.

Some of Bush’s other teammates have gone through what he has. Maurkice Pouncey knows what it’s like to tear an ACL, for example. David DeCastro tore an MCL as a rookie. Zach Banner is currently going through his own ACL recovery process, so he won’t be going through it alone—unfortunately.

Everybody that I can recall coming back from an injury with this team has made it a focus to talk about how helpful it was to have their teammates and the organization fully behind them. I don’t think we should take it for granted that this is the case for every team. Just look at Eric Ebron’s situation with the Indianapolis Colts a year ago, or Kelechi Osemele with the New York Jets.

Of course, when you make a long-term investment in somebody, it’s in your own interests to do everything in your power to put him in a position to excel, and that means surrounding him with all of the resources possible when he is working on coming back from an injury.

Although he tore his ACL, there is no reason to believe that he can’t come back as good as new, playing with the same speed that got him drafted. Of course, most likely it will be a good while before we hear anything from the team about the status of his recovery, so anything we learn will likely be through what he decides to share on his own.