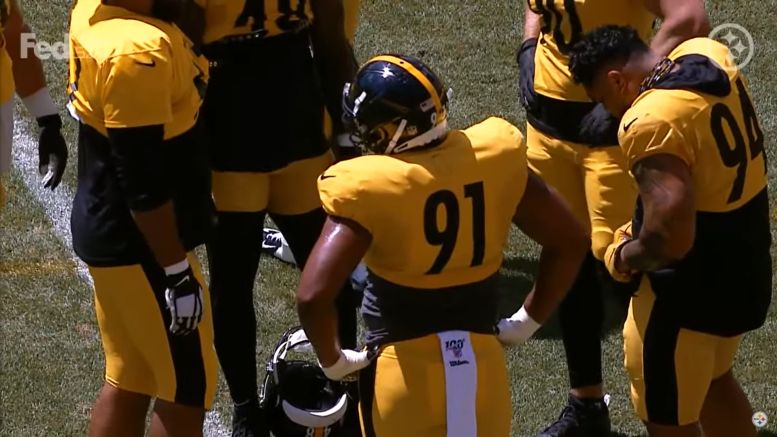 Pro Football Focus likes to talk about ‘secret superstars’, players who perform very well in less heralded roles or who are not getting as much attention as others for performing at a similar level. If the Pittsburgh Steelers have a secret superstar this year, I think it would have to be Tyson Alualu—which is saying something for a former top-10 pick who has been in the league for a decade.

At 33 years old, Alualu moved into the starting lineup this year as the team’s nose tackle, but he also plays end in the 3-4 front and tackle in the nickel as well. As a result of that, he has already logged 135 snaps on the season. And it would probably be more if the Steelers haven’t been consistently played with the lead.

The veteran has played at a high level in replacing Javon Hargrave in that role, who signed with the Philadelphia Eagles in the offseason as an unrestricted free agent. Through five games, he has 14 tackles, including three for loss, with three passed batted down. He also has one sack and three hits on the quarterback.

“He’s been very steady, very consistent”, fellow defensive lineman Stephon Tuitt told reporters earlier today. “Tyson’s been in the NFL for a while now, and he’s played every position on the defensive line. I consider him to be a mentor, along with Cam [Heyward] as well. Those guys know what to look for when you’re looking for offensive line tendencies, see keys, and play with great leverage. Having him in the middle is really opening up our defense to do a lot of things”.

Alualu was originally drafted by the Jacksonville Jaguars in 2010. He never quite lived up to his pedigree while there, but signed on to join the Steelers in 2017 as a reserve and rotational player. Due to injuries, he continued to have a larger role than expected, and has consistently proven to be a valuable part of the rotation and as a spot starter.

The Steelers never bothered to really explore the defensive tackle market after losing Hargrave, and they didn’t even address the position in the draft until the seventh round. They were so confident in Alualu that they didn’t even bother to keep Daniel McCullers on the 53-man roster, even though he had never formally played nose tackle before.

Over 52 games with the Steelers, he has registered 116 tackles with 15 for a loss, six tackles, 14 quarterback hits, one forced fumble, and six passes batted down, doing so over 1312 snaps. He is a critical part of the defensive line, even if he hasn’t been recognized as a starter until now. Those around him have always known that.