The Pittsburgh Steelers have now released their first official injury report of Week 8 ahead of their Sunday road game against the Baltimore Ravens and the Wednesday offering shows that eleven players failed to practice earlier in the day.

Of those 11 platers that failed to practice on Wednesday, two of them, Wormley and Dangerfield, were reportedly inured during the Steelers Week 7 Sunday road win against the Tennessee Titans. Wormley reportedly needed an MRI on his knee this week. One other player on that list of 11 players, Hilton, missed the game against the Titans with a shoulder injury.

Steelers head coach Mike Tomlin hinted on Tuesday during his press conference that several players might ultimately sit out Wednesday’s practice and that younger players would get much needed reps in place of them. Thursday’s injury report should shed a lot more light on the Week 8 statuses of several players that sat out on Wednesday with injuries.

Practicing fully on Wednesday was fullback Derek Watt (hamstring), who missed the Steelers Week 7 game against the Titans. Tomlin hinted on Tuesday that there’s a chance that Watt might be able to play Sunday against the Ravens if all goes well with the fullback this week in practice.

“We’ve got a couple of guys that have positioned themselves to work their way back into action, scheduled to practice,” Tomlin said on Tuesday. “Those guys are Mike Hilton and Derek Watt. We’ll assess their health and performance throughout the course of the week and kind of make prudent decisions in that regard. The rest are kind of bumps and bruises along the way I’m sure may limit a guy or two of the early portions of the week, a Wednesday practice, but we don’t worry too much about that.” 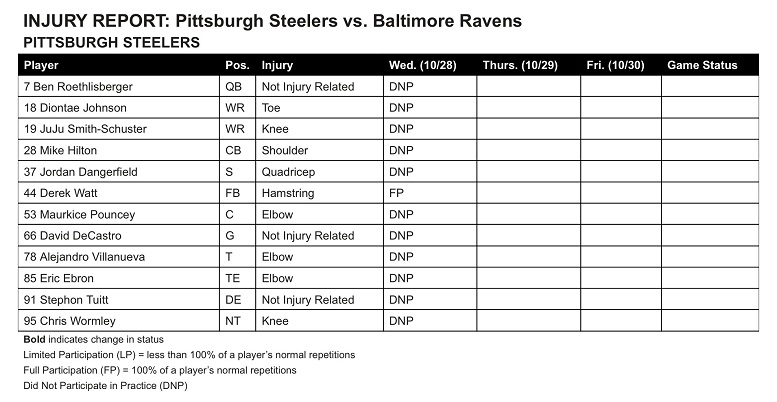