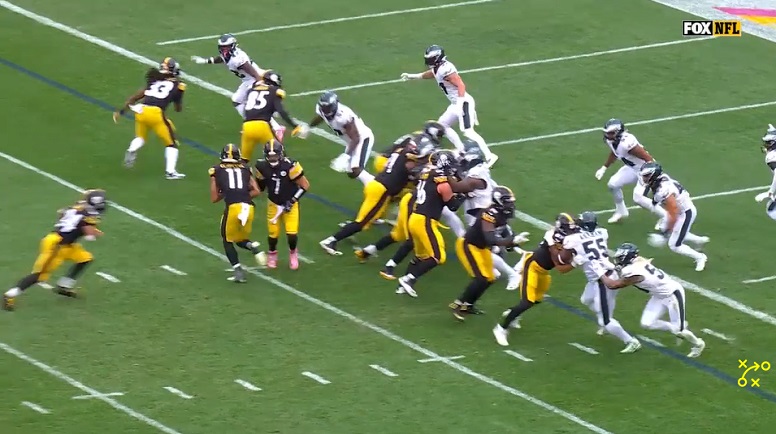 As expected, the Pittsburgh Steelers continued to use a lot of motion in their Week 5 home game against the Philadelphia Eagles. However, after not having great overall success on such plays in their first three games, the Steelers offense did improve their motion at the snap play success rate in their home win over the Eagles on Sunday at Heinz Field.

In total, the Steelers used motion at the snap of the football on 19 total offensive plays against the Eagles. There were three more plays, but they were wiped out by penalties of which two were on the Eagles defense. Of those 19 offensive plays that featured motion at the snap of the football, 9 (47.4%) of them went in the books as successful plays. That’s a better success rate than what the unit accomplished in the team’s first three games (42.9%).

Of those 19 offensive plays that featured motion at the snap of the football, all were runs except for one. That one pass, however, was merely a flip forward in the backfield from quarterback Ben Roethlisberger to wide receiver Ray-Ray McCloud in the first quarter than went around left end for a gain of 8 yards.

The 19 plays resulted in 68 yards gained. The longest gain that used motion at the snap of the football was 25 yards by running back James Conner on a second quarter split-flow zone run up the middle.

Split-flow zone — with WR Chase Claypool on the jet.