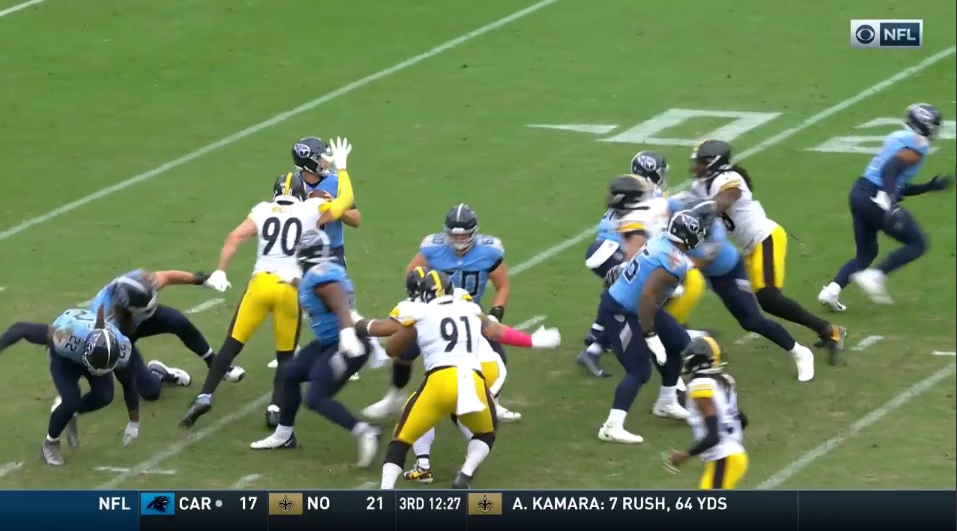 Hope you’re ready for a big ‘ol helping of “weird” from this game.

– The Steelers are 6-0 for only the second time in team history, matching the 1978 unit. That team began the year 7-0, meaning Pittsburgh can again match things if they win next Sunday against Baltimore.

– Pittsburgh’s offense got off to a red hot start. They didn’t finish like it. 24 points in the first half, just three in the second half. Last time that happened wasn’t all that long ago, a 2018 MNF win over the Bucs. Up 30-10 at the half, wound up winning 30-27.

– As I’m sure you know by now, the Steelers scored a TD on their opening possession for the first time since Week 15 of 2018 against the New England Patriots, a span of 24 games.

– Ben Roethlisberger is 2-0-1 in the last three games where he threw three picks. The win today, 2018 against Jacksonville, and the 2018 opening tie versus Cleveland. Prior to 2018, he was 2-9 when tossing at least a trio of picks.

– Tennessee was +3 in the TO margin today. In the Kevin Colbert era, Steelers’ opponents came into Sunday with a 30-2-1 record with a +3 or better margin against the Steelers. The tie was the Browns game in 2018. The two losses were the Steelers 2017 win over the Packers and a 2007 win over the Bengals.

– Roethlisberger was dink and dunk today, averaging just 5.47 yards per attempt. It’s his lowest YPA in any game since a 2016, which was also a win over the Browns. s. It’s only his fourth win with a 5.5 or lower YPA. Today, that 2016 win, a twice in 2008. Once over the Pats and again over Washington.

– JuJu Smith-Schuster and Diontae Johnson each caught nine passes today. Two Steelers’ receivers haven’t caught 9+ in a game since Week 16 of 2018 against the Saints when Smith-Schuster and Antonio Brown had 11 and 14, respectively.

– For only the second time since 1991, as far back as Pro Football Reference’s data goes, the Steelers had 13+ third down conversions today. They finished today 13/18. The only other time that happened was the 1999 opener against Cleveland, welcoming the Browns back to the league with a 43-0 drubbing. Pittsburgh went 15/21 that night.

Over the last three seasons, 2018-2020, only one other team has converted at least 13 third downs. The Buffalo Bills also did it this season…also against the Tennessee Titans (13/17).

– This stat is assisted by NFL Research but had to share it with you guys. AJ Brown’s 73 yard TD was the longest pass play allowed by the Steelers since Rishard Matthews – also of the Titans – went 75 yards in 2017.

– TJ Watt notched his 40th career sack today. He is now in sole first place of most sacks by a Steeler through the first four years of their career. He’s the top four.

– For the first time in his three-year career, Terrell Edmunds had two pass deflections in one game.

– Dating back to last season, Chris Boswell has made 20 straight field goals.

– Last one. Pittsburgh’s been great about possessing the football. 36:37 today, the fourth straight game with a TOP of 34:00+.