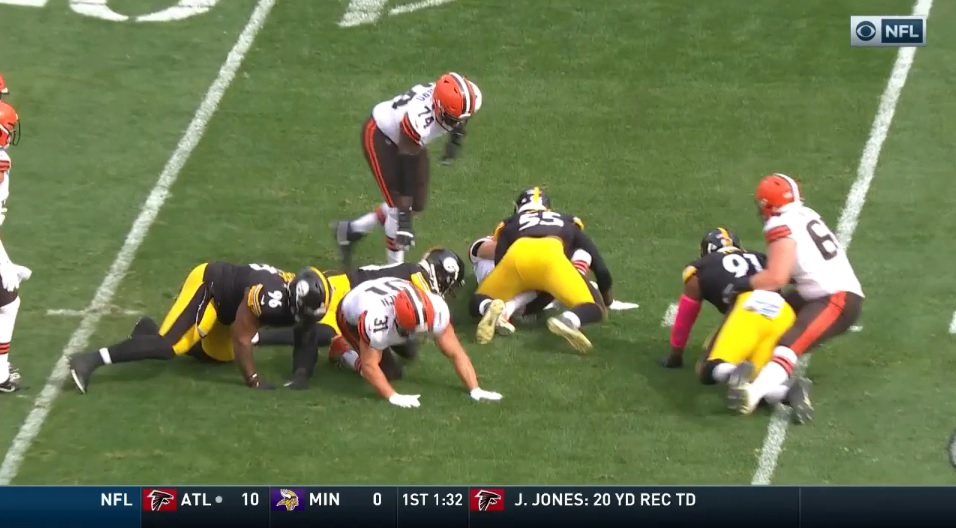 So much for Sunday’s showdown at Heinz Field between the Cleveland Browns and Pittsburgh Steelers being a changing of the guard in the AFC North, like many fans from the shores of Lake Erie were talking about leading up to the game.

Instead, the Steelers bullied little brother for the umpteenth time, battering Baker Mayfield on nearly every dropback, shutting down Odell Beckham Jr. and Jarvis Landry through the air, and clogging running lanes for the No. 1 rush offense in football.

All that led to an impressive 38-7 win at Heinz Field, moving the Steelers to 5-0 on the year.

Aside from some ugly throws on some questionable RPOs early in the game, Ben Roethlisberger was efficient and accurate all game long, taking what the Browns gave him on his 22 throws.

Sure, he didn’t crack 200 passing yards (finishing with just 162 yards through the air), but Roethlisberger pump-faked Denzel Ward into next week on James Washington’s touchdown and really distributed the ball nicely in the blowout win.

He was very accurate on deep balls in this one, showing marked improvement from earlier in the season, including dimes to Chase Claypool and James Washington down the left sideline.

That James Conner slander continues to remain awfully quiet. Conner cracked 100 rushing yards for the third straight game, averaging 5.1 yards per pop on 20 carries and found the end zone again, putting together a very strong start to the season in a contract year.

Conner had some struggles in pass protection Sunday, but that’s the only real “knock” on his game against the Browns.

Benny Snell received six carries and ran hard up the gut, while also making Mack Wilson miss badly in the hole on his 1-yard touchdown to cap off the scoring.

The raw numbers don’t look overwhelming for the Steelers, in terms of the box score, but make no mistake: this run game punched Cleveland in the mouth over and over again and really wore out the Browns’ front seven.

The Steelers didn’t have to do a ton through the air on Sunday, but when they did go to the air, Claypool and Washington dominated.

Washington got off to a fast start, catching a 27-yard dime over Terrance Mitchell in coverage on the first drive, and then cooked Ward on his 28-yard touchdown to blow the game open.

Claypool caught a 36-yarder down the left sideline to jump start the Steelers’ offense, and then later weaved his way down the sideline to the 1-yard line on an impressive 23-yard catch and run.

JuJu Smith-Schuster was noticeably quiet on Sunday, hauling in just two passes for six yards, but so much attention is being paid attention to him in the middle of the field, it’s allowing Washington and Claypool to thrive against one-on-one coverage.

Ray-Ray McCloud let an easy screen pass go right through his hands on third and short, forcing a punt.

I’m not going to punish Eric Ebron and Vance McDonald for just nine receiving yards on two catches (both by Ebron) Sunday.

However, they were strong in the run game, specifically McDonald. He was physical at the point of attack and wasn’t afraid to mix it up in the trenches, springing running backs for good gains.

Sure, the Browns recorded two sacks on Sunday (one was on and overload blitz), but the Steelers’ offensive line was really strong against a really good Browns’ defensive line.

Chukwuma Okorafor saw a lot of Myles Garrett on Sunday and more than held his own. Garrett did record a sack and a QB hit, but overall he was negated by Chuks and Alejandro Villanueva, who helped stymie Olivier Vernon on the other side.

Overall, this was a real positive step forward for an offensive line that is gaining momentum.

So much for Cleveland’s league best run game and ever-improved offensive line.

Tuitt physically dominated Joel Bitonio and Chris Hubbard throughout the afternoon, and also embarrassed center JC Tretter on one rep. If he can just stay healthy this year, I don’t have a clue how you slow this front five down.

Heyward put a massive hit on Mayfield in the game and really dominated the point of attack against the run. This is – right now, without a doubt – the best defensive line in football.

It sucks losing Devin Bush for the year due to a torn ACL, not only because he’s so important to communication, but because he’s been playing really good football. That was the case Sunday, sacking Mayfield and helping shut down Cleveland’s run game.

Once he left with the injury though, veteran backup Robert Spillane stepped in and  really sent a message physically, putting good licks on Austin Hooper and Kareem Hunt in space. I want to see more of him.

Vince Williams really thrived against the run and made some plays in coverage as well.

Outside, Bud Dupree and TJ Watt really gave the Browns trouble. Dupree recorded two sacks and laid some thunderous body blows to Browns players, while Watt was a guy the Browns were worried about all day and threw extra blockers at.

Imagine thinking Minkah Fitzpatrick was bad through four weeks because he hadn’t made a splash play.

Egg or your face for that one, folks.

Fitzpatrick came through early, picking Mayfield off over the middle and returning it 33 yards for the score, giving Pittsburgh and early 10-0 lead that forced the Browns pretty much out of their offense.

Joe Haden was really good Sunday as well, aside from his holding penalty. He broke up a number of passes and came downhill with force a couple of times. It was great to see Cam Sutton get more run on Sunday. He made a play right away, leaping high to pick off Mayfield on a broken play.

It really feels like Steven Nelson wasn’t targeted much on Sunday, but I need to see the All-22 to determine how he played.

Terrell Edmunds quietly continues to put together good game after good game. He broke up a pass over the middle after driving on the football and is playing assignment sound football these last two weeks.

Alex Highsmith had his breakout game on special teams Sunday, no question.

Highsmith was all over the field on special teams snaps, laying the wood to a couple of Browns in the process, setting a physical tone. I believe all three tackles by Highsmith on Sunday were on special teams.

The same goes for Jordan Dangerfield. He laid a couple of big hits on kick coverage, sending a message to Browns rookie Donovan Peoples-Jones in the process.

I’m still not thrilled with Dustin Colquitt at punter. His leg looks cooked, and that looked to be the case again on Sunday as he averaged 41.8 yards per punt. Not great.

Chris Boswell was terrific on Sunday, drilling a 38-yard field goal to open the game, and then nailed all five extra points in the win.