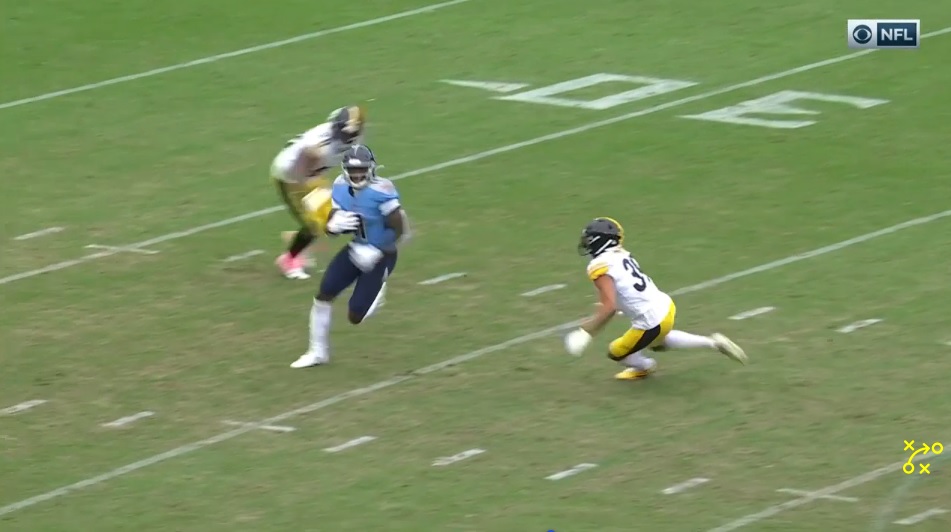 In my five years here with Steelers Depot, the Steelers matched a single-game best in the missed tackles department, recording just three misses – one of which came on special teams by an undrafted free agent.

Going up against a physical, downhill team, the Steelers showed up in the tackling department.

Seeing just three missed tackles against a downhill, physical team like the Titans tells me just how good this Steelers’ defense can be the rest of the season. They’ve cleaned up the tackling issues that have plagued this defense for years. Now, they’re flying all over the field, laying the wood and shutting down opposing offenses.

The only real issue coming out of Sunday’s game from a defensive standpoint was Minkah Fitzpatrick. His tackling issues continue to rear its ugly head on the year, missing two tackles on Sunday.

The first one wasn’t too bad, seen here against Derrick Henry.

Minkah does a good job filling the lane here and staying square to the line of scrimmage. It’s just a tough task to come downhill as a safety against a physical specimen like Derrick Henry at full speed.

The second miss by Minkah came on AJ Brown’s 76-yard catch and run for a score. It was a very, very poor rep by Minkah, one that saw him fall to the ground as Brown blew past him.

As far as James Pierre’s miss goes, he had an open-field shot at Titans returner Kalif Raymond and whiffed with the Steelers up 14-0.

The good news with Pierre is that he shook off the miss and really played well down the stretch in the game, finishing with two stops. His late hit penalty in the third quarter was a terrible call, considering he was already attempting the tackle in play and the continuation carried Pierre and Raymond out of bounds.

Just look at the short area explosiveness here from McCloud. He makes three Titans miss in roughly a 10-yard box. My favorite part about this return from McCloud is watching the one Titans defender buckle in space, almost like a crossover in basketball.

Later on in the first half, McCloud ripped off this 57-yard punt return by making the first man miss, and then absolutely freezing a defender in space, bursting upfield into space.

It’s just so great to have a return man as explosive as McCloud on this team.

Finally, I wanted to take a look at one of the best offensive plays of the day by the Steelers, specifically Diontae Johnson.

Facing a third and 11, Ben Roethlisberger threw quickly to Johnson on a slant, allowing him to get the ball quickly. From there, Johnson slams on the brakes and turns the corner against Titans’ corner Tye Smith Jr.

This is what Johnson can do with the football in his hands. It’s incredible. He takes a 5-yard pass and turns it into a first down, which helped the game’s opening drive end in a touchdown to himself.

Just a small side note here: James Conner has 11 of his 20 forced missed tackles in his last two games. The veteran running back is really starting to take off in 2020.