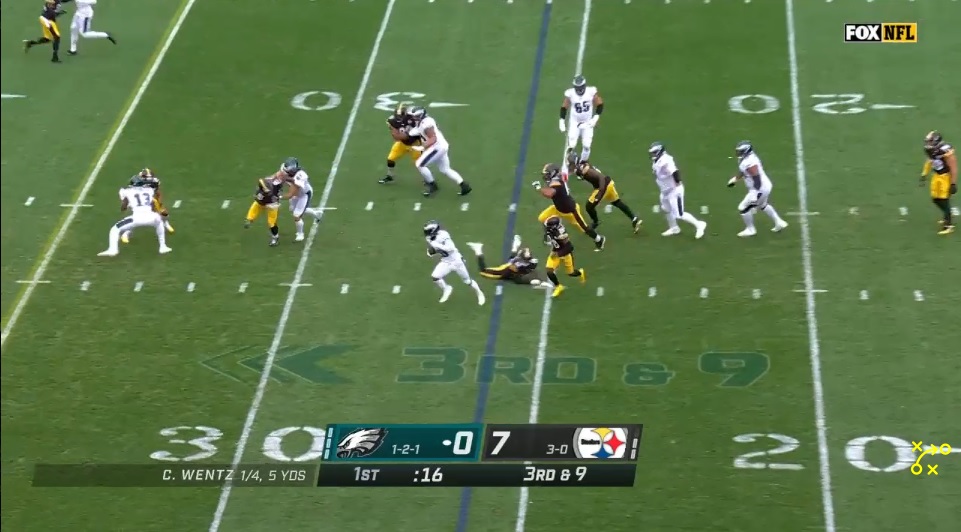 The Pittsburgh Steelers certainly gave us a scare in the second half Sunday against the Philadelphia Eagles, at least in terms of coverage struggles, but overall the Steelers continued their early-season trend of tackling well.

After a COVID-induced hiatus for a week, the Steelers’ defense followed up one of the best-ever tackling performances I’ve tracked here at Steelers Depot by turning in another solid performance Sunday at Heinz Field.

Obviously, the Steelers doubled their misses from the last time they were in action, but overall it was a solid day.

The real concern here is the fact that Bud Dupree continues to leave plays in the backfield, namely when it comes to getting his hands on the quarterback. If Dupree finished those four sacks he’s missed in the backfield, he’d be half a sack off of Aaron Donald, who leads the league.

His miss on Carson Wentz on Sunday simply can’t happen, especially for a guy the size of Dupree with his strength.

Dupree does a great job setting left tackle Jordan Mailata up vertically, clubbing him off balance to slip back inside. I’m sure he was caught off guard a bit by Wentz dipping back towards him so quickly in the pocket, but that’s a play Dupree has to make. You can’t slide off Wentz’s back like that.

If Dupree makes this play, it saves a bogus roughing the passer penalty on Vince Williams and likely keeps the Eagles off the board on the drive.

One play later, Minkah Fitzpatrick made his lone mistake of the game.

I like the way he closes downhill on the crossing route by Travis Fulgham, but Fulgham is a big receiver and Fitzpatrick has to wrap up and finish the tackle there.

A few times this season Minkah has gone with just the shoulder for the big pop, but guys don’t go down that easily. He needs to be better in this department. If not, he could give up a real splash play in a big spot down the road that could really haunt the Steelers.

This is a tough one to watch.

I went back and forth on giving Dupree a miss here, but he runs right past Sanders in the hole. That’s a miss for me.

Once Dupree runs right by, Hilton has the cleanest look you’ll ever get at a running back in the hole. Hilton misses, leading to Sanders hitting the second level with jets.

Late in the run, I gave Nelson a miss after disengaging from a JJ Arcega-Whiteside block before then missing Sanders’ legs, taking out teammate Devin Bush in the process, allowing Sanders to cost for the 73-yard touchdown on a third and nine draw.

Offensively, it was a mostly quiet game in the forced missed tackles department as the Steelers finished with six forced misses, losing the tackle battle with a -2 mark against the Eagles.

Eric Ebron cracks the list this week, forcing a miss by Cre’von LeBlanc in the flat, spinning out of the tackle to pick up a first down, while Conner and McCloud forced misses near the line of scrimmage to pick up additional yardage.

The lone forced miss worth showing again though was Chase Claypool’s on Eagles safety Marcus Epps, leading to Claypool’s second TD of the game, a 32-yard catch-and-run.

Claypool’s speed after the catch destroys the angle Epps may have had, leading to an easy forced miss to give Claypool a runway into space for the touchdown.

This kid is special.