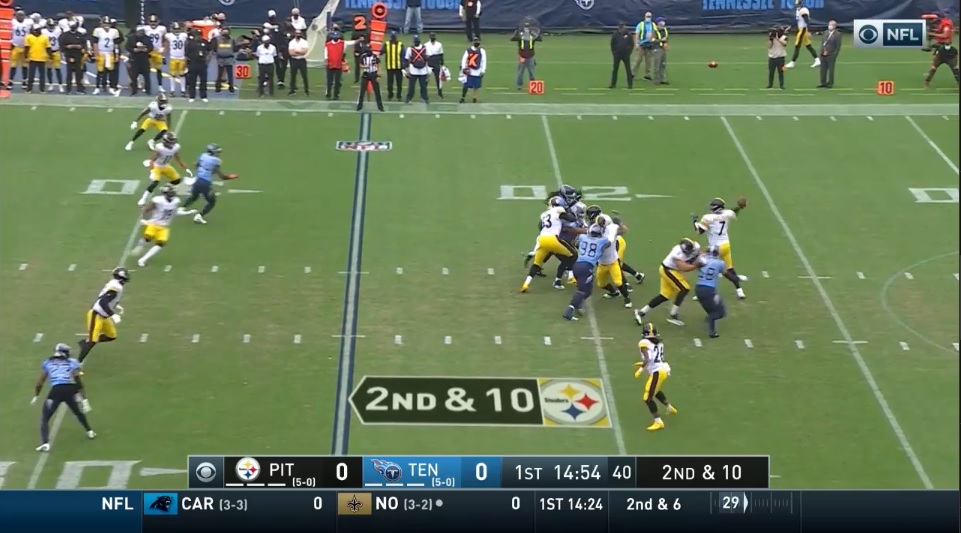 Ben Roethlisberger is thriving a year removed from season-ending elbow surgery. Gone are concerns about his arm strength, if he still had it, if he could still lead the Pittsburgh Steelers’ offense downfield. One key to his success is the lack of pressure in his face. Before the Titans’ game, he remarked he didn’t feel sore during the week. And the numbers back that up. Roethlisberger is getting sacked at a historically low rate and that’s keeping the offense on schedule and #7 upright.

Through his first six games, he’s been sacked just eight times. Here’s how that stacks up year-by-year with the exception of the injury shortened 2019.

Roethlisberger’s eight sacks through six games are the second lowest of his career only bested by his rookie year, 2004, with seven. To state the obvious, the offense was built much differently back then, reliant on the run game and Roethlisberger managing things. That’s reflected in their attempts. In 2020, Roethlisberger is averaging 35.7 attempts per game. In 2004, it was just 22.8. Pound for pound, Roethlisberger is protected better this year than any other.

That’s two-fold. Credit to an offensive line that’s quickly come together even with injuries that have tested the right side of the line. But just as crucially, Roethlisberger has evolved his game. No QB gets the ball out of his hand quicker than #7, under 2.35 seconds. That sure makes life easier for the offensive line protecting him. It’s been the key to the fact he’s playing long as he has. Look at those numbers in the late 2000s. Roethlisberger took a beating, playing his backyard style as the offense opened things up and ran through him, not the running backs.

That pass pro will be tested in Sunday’s matchup against the Baltimore Ravens. Baltimore ranks fourth in the league with 22 sacks and the second most of teams who’ve played just six games, only trailing the Steelers. They’ve also traded for Yannick Ngakoue who racked up five sacks already with the Minnesota Vikings. Week 8 will be a test of if the Steelers can keep the good times rolling by keeping their quarterback off the ground.