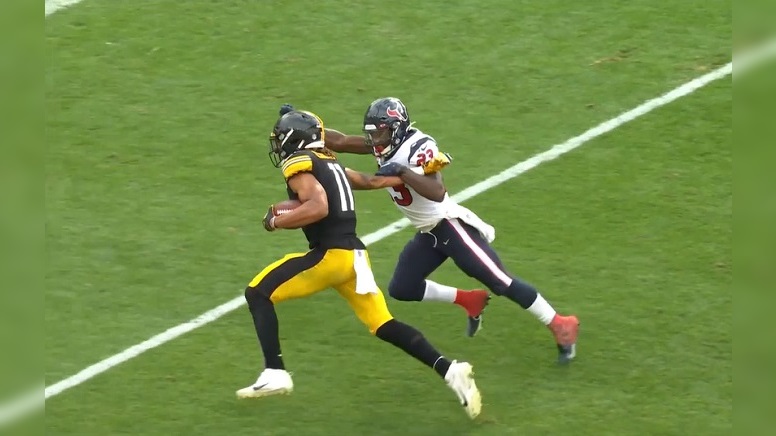 The expected points added (EPA) statistic was created in order to measure the value of each individual play in a game of football. That means EPA takes into consideration that yards gained are not all created equal by using the down, distance, and field position of the offensive team at the start of the play and then examining it at the end of the play.

That said, let’s take a look at the top five, non-touchdown plays for the Pittsburgh Steelers thus far in the season based on just EPA.

Facing a third-and-9 against Houston with a seven-point lead with just over two minutes to play, Roethlisberger completed a nearly instantaneous screen to Claypool. Claypool quickly shook two Texan defenders before scooting to about the 4-yard line when Houston’s Eric Murray punched the ball out of Claypool’s hands, sending it out of bounds.  The play, ending at the three-yard line, resulted in an EPA of 3.89 and a YAC EPA of 4.05.

The Steelers’ second-highest EPA play of the season shows that not all crucial plays have to be “big time” plays. Facing a fourth-and-1 against the Texans, down 21-to-17 early in the third quarter, Roethlisberger threw an approximately 30-yard bomb to Claypool, who was facing man-to-man coverage from Bradley Roby. Roby gives Claypool a rather significant bump at the 15-yard line, knocking him to the ground and ultimately drawing the defensive pass interference flag. It is not surprising that this play ranks so highly in the Steelers’ EPA thus far this season, as it not only converted a fourth-and-1 scenario into a drive-extending first down but also moved the ball from the Texans’ 39-yard line to inside the red zone.

With a fresh set of downs against the Philadelphia Eagles with just one-minute expired in the third quarter, Roethlisberger faked a handoff to Connor and pitched the ball to McCloud who took advantage of excellent down-field blocking. McCloud ran for fifty-yards before being touched by an Eagles player and then being dragged down by Alex Singleton and Darius Slay at the 5-yard line. Much like the Roethlisberger-to-Claypool pass interference play above, McCloud’s rumble flipped the field, moving the ball from the Pittsburgh 37-yard line to the Eagles’ 5-yard line. However, since the play occurred during a first-and-10 scenario, the EPA was lessened.

Against the Denver Broncos, the Steelers faced a second-and-6 with 1:44 left in the game, nursing a 26-to-21 lead. Roethlisberger handed off to Conner at the 30-yard line, who broke some early tackles on his way to a 59-yard gain. While the EPA formula doesn’t account for the fact that Conner’s run essentially sealed the victory for the Steelers, it did score big EPA points for extending the drive as well as all but guaranteeing a Pittsburgh field goal if the game situation differed.

Against the New York Giants, the Steelers did a no-huddle offense early late in the first quarter while facing a third-and-9. Roethlisberger cocked and loaded a deep ball to Claypool who somehow managed to get both feet in for a gain of 39 yards. A drive-extending play, indeed.

With just under ten minutes remaining in the game against the Broncos, the Steelers had the ball on the 48-yard line and had a full set of downs at their disposal. Roethlisberger handed the ball off to Benny Snell, who was hit behind the line of scrimmage and fumbled the ball, which was ultimately recovered by the Bronco. The EPA of the play? -5.12.

All things considered, the Steelers are solidly in the top-third of the NFL when it comes to cumulative EPA. And, yes: the Jets are so horrid on offense that they single-handily distorted the y-axis of the graph. 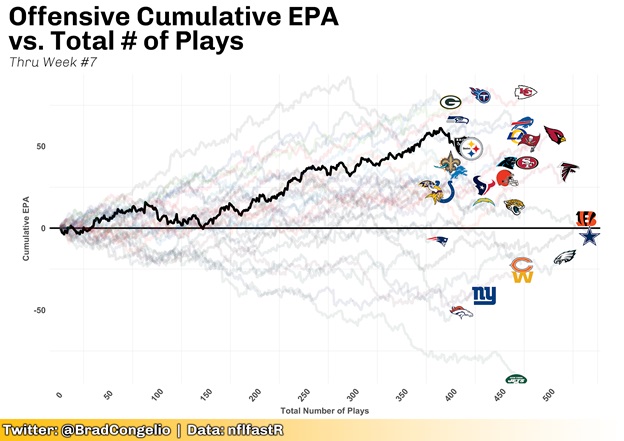 While all teams are going to have negative EPA plays, the ultimate goal is to have a positive upward trend. Despite some early-season offensive issues, as seen in the 100 to 150-total play range, Pittsburgh has continually gotten the job done on offense. And, with a nasty defense, all signs continue to point towards this being a special year for the Steelers.