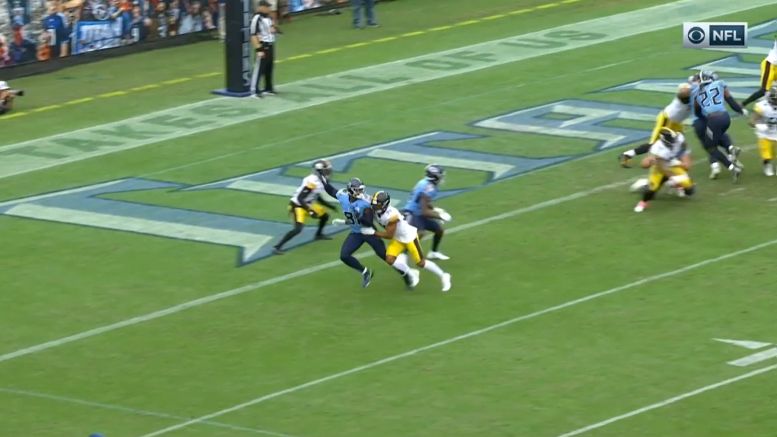 Reasoning: One game after exploding back onto the national spotlight with a pick six, Minkah Fitzpatrick had a couple of key lowlights in the Steelers’ struggles in the second half against the Tennessee Titans on Sunday.

Even though he finished Sunday’s game with five tackles, it was overall a rough outing for Minkah Fitzpatrick, whose most significant play on the day was taking an incorrect pursuit angle and slipping on what proved to be a 73-yard touchdown pass to A.J. Brown, which he could have helped prevent and hold to a relatively modest gain instead.

According to Pro Football Focus, he was only targeted once in the passing game and did not give up a reception, but nevertheless, they allowed the Titans to average 7.3 yards per pass attempt (while the Steelers offense averaged 5.5.

Even worse, he was flagged for potentially an unnecessary defensive holding call on fourth and goal from the one-yard line while the Titans were down 10 points late in the game. The pass fell incomplete, but the penalty gave them a new set of downs, on which they quickly capitalized.

Basically, two mistakes that led to two touchdowns, one of which surely otherwise would not have happened, because it would have resulted in a turnover on downs. All of the plays on which he recorded tackles were successful plays for the offense as well, though as a free safety, you are much more likely to be recording tackles down the field.

Still, it was not the sort of performance you wanted as a follow-up to your best game of the year, and especially not with the Baltimore Ravens coming up. Fitzpatrick’s run defense left something to be desired, something Baltimore is going to see and perhaps try to take advantage of. He will need a quick bounceback instead.