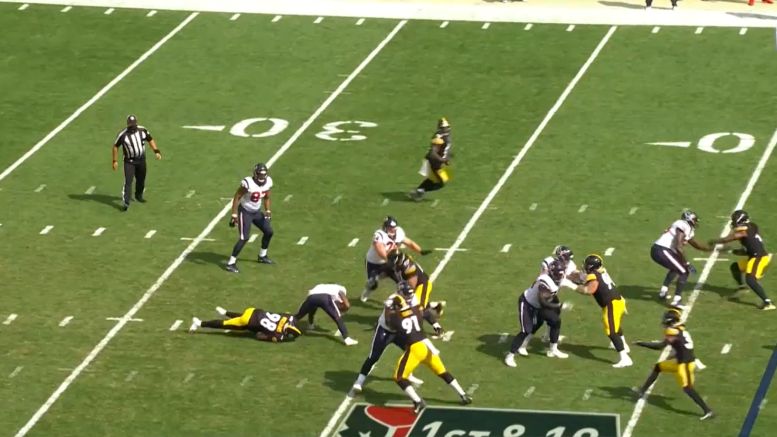 The Pittsburgh Steelers have 15 sacks through the first three games of the season, the most in the NFL through three games, and the most that any team has had through three games in over a decade. Many of them have come from predictable places; T.J. Watt and Bud Dupree together have six, and Stephon Tuitt has two more.

Five of their sacks, however, come from off-ball players, including three from the secondary. Mike Hilton has two of them already this year. Vince Williams, who had eight sacks in 2017, also has two already, as both of them got a piece of Deshaun Watson on Sunday among the Steelers’ five sacks.

This is a defense that has led the league in sacks with over 50 each season for three straight years, and they have positioned themselves to repeat that once again in 2020. And they do it in every way they can. They have a great front-four rush, but the ability to have off-ball talent that excels at blitzing is vital as well.

Williams, the second-longest-tenured defender behind Cameron Heyward, likened rushing the passer to a chess match, and “I think me and Mike [Hilton] are the knights” on the board, he told reporters yesterday, via Teresa Varley. “We are versatile pieces and we dominate in a specific area of the game that our counterparts in the NFL don’t usually dominate in. That makes us very unique individuals”.

According to Pro Football Focus, Williams isn’t even close to being among the league leaders in pass-rush snaps among off-ball linebackers. Five players, including Devin White, have 30 or more pass-rush snaps, while Williams has 16, but he has produced four pressures, including two sacks. His 18.8 pass rush productive rating is second-highest among off-ball linebackers with at least 10 rushes, behind, interestingly enough, Jon Bostic.

Hilton has the third-most pass-rush snaps among defensive backs this year, behind only Jamal Adams and Malcolm Jenkins, and is tied with Jenkins among others for the second-most pressures with five. His pass rush productivity rating of 16.7 ranks sixth among defensive backs with at least 10 pass rushes, and second among corners.

Devin Bush, however, still needs to work on his pass-rushing ability. He has only generated on pressure on 12 pass-rush opportunities so far this season, and this was certainly an area of his game in which the Steelers were counting on his ability to have an impact.

Having two inside linebackers who are adept at blitzing has been a staple of Steelers defenses for many years, with pairings such as James Farrior and Larry Foote (and later Lawrence Timmons and Ryan Shazier) commanding a lot of defensive attention.

Timmons’ 35 career sacks are the most by an off-ball linebacker in team history. Chad Brown, who did play outside as well, had 31, and Farrior had 30, Foote 21. Williams is now at 19.5, breaking a tie with Levon Kirkland, and working his way up.