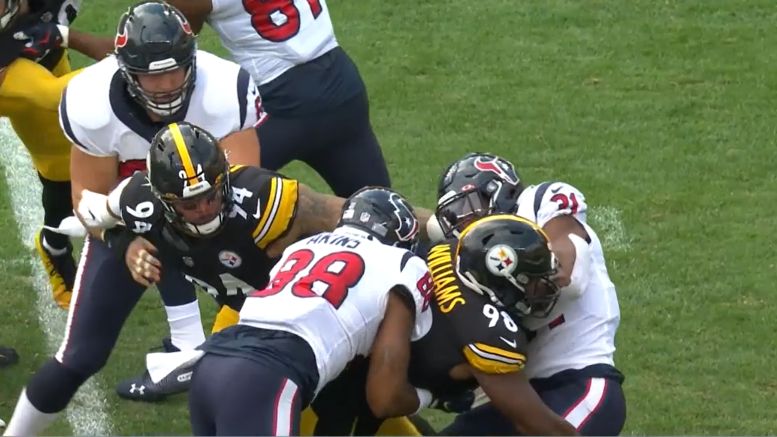 Heading into the fourth week of the season, the Pittsburgh Steelers are allowing by far the fewest rushing yards per game at just 54 yards on average, with the week two victory over the Denver Broncos serving as an outlier. They only allowed about 30 yards combined in their other two games.

It’s a remarkable start, no doubt, that included stopping one of the best backs in the league in Saquon Barkley in week one, tackling him for a loss more often than not, and then containing former All-Pro David Johnson on Sunday. To what credit do they owe this success?

“Our coach, Keith Butler, comes up with a great strategy on how to minimize the run so that we can get after the pass”, said inside linebacker Vince Williams, who leads the league in tackles for loss, “and it’s been working for us lately, so I think we’ve just got to keep sticking with that”.

The assignments don’t get easy from here, however, as their next assignment is Derrick Henry and the Tennessee Titans, who are the only opponent they have faced so far this year to have actually managed to win a game—in fact, they haven’t yet managed to lose.

Henry currently leads the league in rushing with 319 yards in the Titans’ first three games, although it has taken him a league-leading 82 carries to get there, producing a yards-per-carry average of just under 3.9 yards. His longest run so far is 16 yards after having nine explosive runs in 2019, with three of more than 40 yards.

He led the league in rushing that year with 1540 yards, doing so on 303 attempts, with 16 rushing touchdowns. He was the first player to rush for over 1500 yards in a single season since Ezekiel Elliott did it in 2016.

So far in 2020, the Titans are actually 10th in passing yards and 13th in rushing yards, even though they rank 18th and 4th in attempts, respectively, so they are actually having more success through the air than on the ground despite their very nearly balanced attack—104 pass attempts to 103 rushing attempts.

They have also scored exactly the same number of points as the Steelers have this season, 80 in total, averaging 26.7 points per game, though scoring has been at an all-time high this season, so that merely ranks them tied in the middle of the pack at 15th.