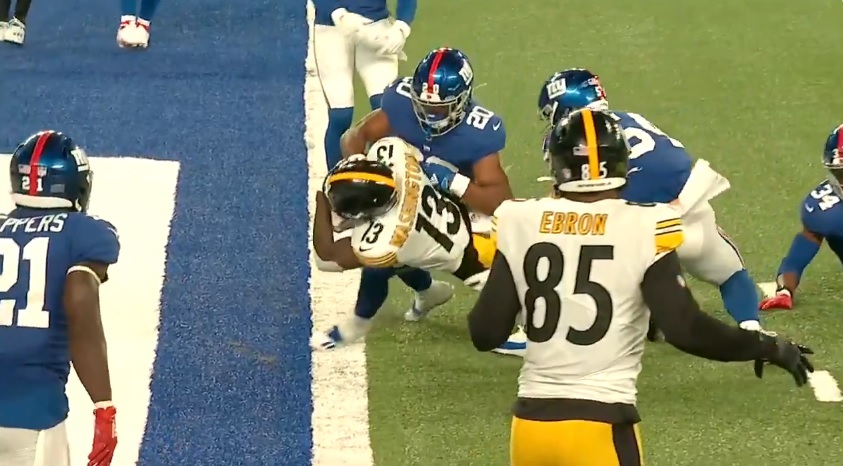 Winners and losers from the Pittsburgh Steelers Week One 26-16 win over the New York Giants Monday Night.

JuJu Smith-Schuster: Smith-Schuster’s game tonight was much closer to 2018 than 2019. Which is a very good thing. He was Ben Roethlisberger’s favorite target over the middle of the field, catching the first touchdown of the season. He routinely won in man coverage and showed great ball awareness diving on a Benny Snell fumble in the second half.

Bud Dupree: Fair to say Dupree was the best Steeler on the field tonight. Sure, it helps when the Giants decided to leave him on tight ends or simply not block him at all but he was all over the field. Chasing runs backside, getting pressure, the latter leading to Cam Heyward’s INT that halted a Giants’ 19 play drive that really turned the tide of the game. Dupree didn’t have quite the success as a pass rusher against rookie LT Andrew Thomas but he was awesome Monday.

TJ Watt: Watt was relatively quiet as a pass rusher (though forced a not-called fumble in the first half) but found ways to make splash plays. Like this defense did last year, Watt came up with a timely interception, anticipating and leaping in front of a quick Daniel Jones pass early in the second quarter. That set up Pittsburgh’s first score of the season. He ended the game by whipping RT Cameron Fleming over and over.

Ben Roethlisberger: #7 looked pretty good tonight, no? The line struggled to give him time and Roethlisberger seemed to walk backwards into at least one sack. But overall, he was sharp for a dude who hasn’t played football in almost exactly one year. He showed zip and touch on his throws, made good decisions, and helped keep the offense afloat until the run game got going in the second half.

Benny Snell: The one fumble aside, Snell’s presence allowed the Steelers to have an actual run game tonight. Something they didn’t have with James Conner who exited with an ankle injury. He got downhill, ran tough, but showed added burst and explosiveness to win the corner. He may be the guy going forward given Tomlin’s “feature back” mentality. Snell ended the day with over 100 yards, the first of his pro career.

James Washington: All those years on the farm really do help in the NFL. Washington showed grown man strength on his touchdown, running through multiple tacklers to dive over the goal line. Not a gaudy stat line but his TD to put the Steelers up 16-10 at half was huge.

Run Defense: Run defense is a unit mission, especially when you’re facing Saquon Barkley. Pittsburgh shut him down. He carried the ball 15 times for six (!!!) yards. Defense was swarming. Every level, d-line, linebackers, secondary did their part.

Stefen Wisniewski: Wisniewski struggled in run and pass before leaving the game with a reportedly a torn pec late in the fourth quarter. Times where his feet just went dead and he struggled to get a push against that tough Giants’ interior defensive line. The whole line struggled, I don’t want to pick on Wisniewski alone, but he seemed to struggle more than anyone else.

Special Teams: My hope pre-game was for special teams to be a non-story. That didn’t happen. Diontae Johnson muffed a point, Chris Boswell doinked an extra point off the right upright, drilled a kickoff out of bounds, and the punt coverage was poor. Poor net yardage. Fear was special teams could look ugly without a preseason. Those fears became reality tonight. Glad it didn’t cost them the game. It could have.

Diontae Johnson: Johnson was part of those special teams woes but even as a receiver, he was up-and-down. Made some nice plays but had one drop and one miscommunication where Roethlisberger threw it off his helmet. Johnson is clearly talented but too inconsistent right now. Hands must improve.

James Conner: No one wants to be mean to Conner, I tweeted pre-game how big of a year I thought he was in store for. But *sigh*. Another injury. An ankle ailment that limited him to six carries for nine yards. Not nice.