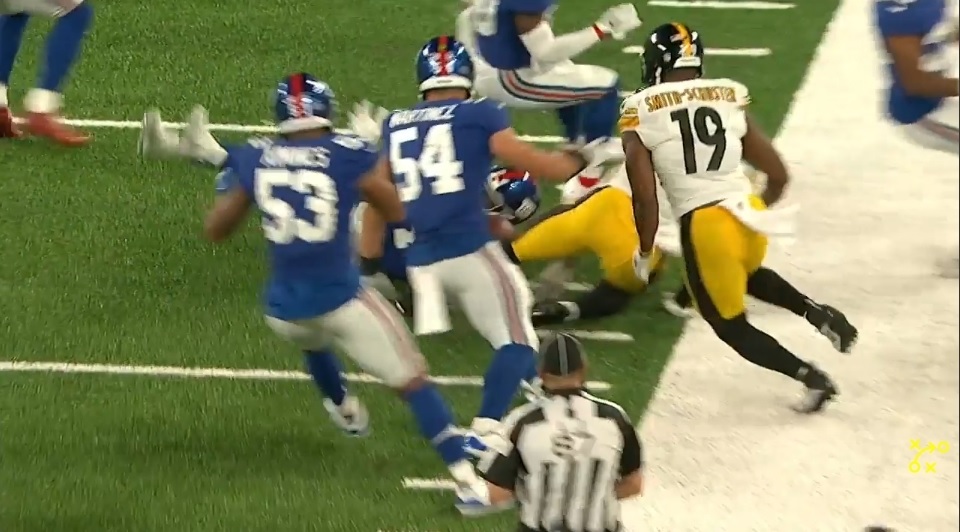 JuJu Smith-Schuster sure had a good start in forgetting about a miserable 2019 season. He caught two touchdowns in Monday’s opening win over the New York Giants. Beyond the big plays in the passing game, QB Ben Roethlisberger praised Smith-Schuster for his overall, team-first attitude.

“I can’t speak for JuJu on what his motivation is, but I know as a team guy, he’s motivated to help his team win football games,” Roethlisberger told the media Wednesday. “I think you saw that on Monday. You saw a guy that was blocking, that made the tough catches, that dove into a pile. How many guys that are ‘looking for a contract’ and trying to get paid would dive into a pile and risk their body and injury to recover a fumble that he didn’t fumble. To me, that just shows what kind of a team guy he is.”

The play Roethlisberger is referencing is Smith-Schuster diving on a Benny Snell fumble late in the third quarter. Snell was finishing off a 21 yard run but lost the ball at the end. Though there were several Giants’ players around the football, and JuJu the only Steeler, he found a way to make the play.

That was a crucial moment, two plays after Cam Heyward’s interception after the Giants 19 play march down the field. Had the Giants recovered, they would’ve been down six in great field position facing a Steelers’ defense still searching for oxygen on the sideline.

Instead, Pittsburgh retained the football. The drive ended not in a turnover but Chris Boswell field goal to give the Steelers a two-score advantage they wouldn’t give back.

Smith-Schuster has been criticized by outside voices for not taking football seriously enough. Too much attention on himself, his brand, his TikTok videos. But when it’s time to play football, he’s serious and focused and showed why he’s the team’s top weapon. So long as he keeps putting in performances like this, he’ll be paid handsomely for it after the season, though it may not be the Steelers who are handing him that check.