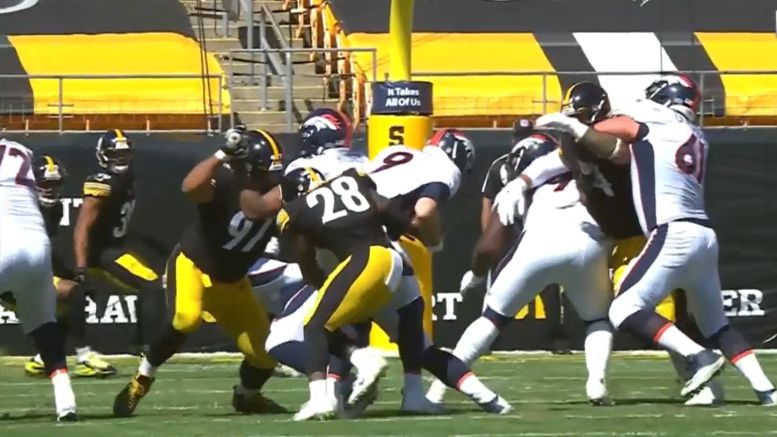 Only two players in the NFL right now have more sacks than Mike Hilton, and one of those is his teammate, T.J. Watt. While two and a half sacks isn’t an absurd number through two games—after all, Watt got all of his on Sunday—Hilton is the only member of the Pittsburgh Steelers so far to record a sack in multiple games.

And he’s a nickel back. And this isn’t new for him, either. He has 8.5 sacks in 49 career games, which is the second-most among defensive backs during that time, behind only Jamal Adams, who has 14—including two already this season with the Seattle Seahawks.

“It’s a lot of his innate ability and the times he’s done it”, defensive coordinator Keith Butler explained yesterday about why Hilton has been able to be so productive as a pass rusher despite his size, via transcript. “We had him do that quite a bit since he’s been here, so he has got a good feel for it, when he’s going. When he’s not the count, what’s going on with the clock, how much time he’s got there and all that stuff. He uses all that”.

According to PFF, Hilton rushed the passer 57 times last year, 52 times the year before. His most extensive blitzing came during his first season in 2017 when he did so 76 times. With 20 blitzes through two weeks this year, of course, he is well on-pace to set a new career high, but the numbers will balance as the season progresses.

“It’s hard for me to describe unless you’ve been out on the field. There’s body language from different people”, Butler said. “It may be the slot guy. It might be the offensive tackle. It might the running back in the back field. A lot of times people can’t help themselves and look at certain people or they look to where they are going or they look to see who they have to pick up and stuff like that. You can learn a lot if you watch film and you’ve done it a lot. He has experience of doing it a lot, so he’s pretty good with what he does”.

There’s no question that he’s not only one of the most frequent but the most effective of blitzers out of the secondary in the NFL. This is a trait that the coaches discovered very early on, and they’ve never been shy about making use of it. It’s already been effective this year, to the surprise of nobody.