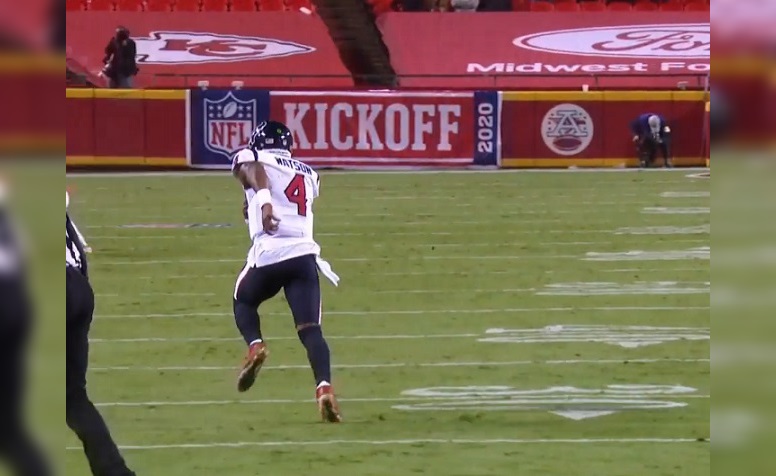 The Pittsburgh Steelers’ first two challenges from out of the backfield during the 2020 season were not among the most pressing they have ever dealt with. Their first assignment was Daniel Jones playing behind a tweaked New York Giants offensive line that was missing its left tackle after Nate Solder opted out of the season.

Next came, briefly, second-year Drew Lock for the Denver Broncos, who was knocked out of the game early and replaced by Jeff Driskel, who managed to represent himself pretty well, especially considering the fact that he took a beating early and often.

Deshaun Watson, however, is clearly a cut above what they have already faced so far, a fact of which Devin Bush is very aware, as he told Rich Eisen. “He’s a really, really, really good quarterback. His play speaks for itself. You see the Texans believe in him. They just upped and gave him some more money. So he’s there, he’s gonna be there for a while”, he said.

“Everything goes through him. He’s gonna be a challenge for us”, Bush continued. “He makes really good throws. Of course he’s good with his feet. He’s one of those playmakers, you saw last year in the playoffs when he got out of that sack and made that throw and they win the game. He’s the type of player that’s gonna put the game on his back when it’s time for it, and we’ve got to shut him down”.

Earlier this offseason, the Texans gave Watson a new four-year contract extension worth $156 million, averaging $39 million per season in new money, and included a $27 million signing bonus. It can be worth up to $160 million with escalators.

Watson is already a two-time Pro Bowler, both in 2018 and 2019. He was on his way to the Pro Bowl as a rookie, but an injury limited him to only six games, in spite of which he still managed to throw 19 touchdown passes during that relatively short period of time.

Running the ball is a component of his game as well, even though he does look to throw first. Over the previous two seasons, he rushed for a combined 962 yards with 12 rushing touchdowns, averaging 5.3 yards per rush. He also caught a six-yard touchdown pass, so there is that.

In spite of the fact that he is one of the best athletes under center, however, the pass rush is able to find him. He was sacked 62 times in 2018, and 44 last year in 15 games. He has already been sacked eight times in 2020, which is tied for the most in the NFL. And the Steelers have 10 sacks so far this year.