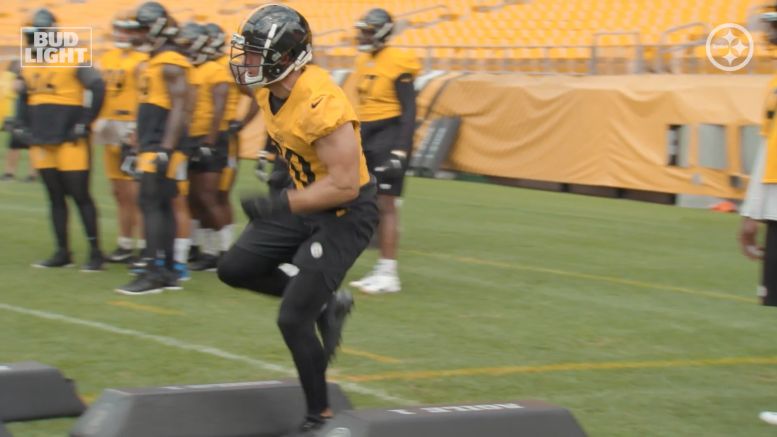 While there is some competition between Tyson Alualu and Daniel McCullers at nose tackle, the only true position battle for a starting job in training camp for the Pittsburgh Steelers this year is a right tackle, and it pits third-year Chukwuma Okorafor against fourth-year Zach Banner.

Nobody has seen them up close and personal more than has T.J. Watt, who is the Steelers’ premiere edge defender, working on the left side of the defense, and thus against the right side of the offensive line. While they don’t have the preseason through which to hone their skills, they do have one of the best defenders in the league to go up against in practice every day.

Speaking to the media before practice yesterday, Watt weighed in on how the battle between the two was going, and he made sure to mention that the opportunity to go up against the two of them was good work for himself, as well.

“I take it as a challenge to go up against two totally different tackles”, he said. “It’s always good to not go up against the same guy every single day. To be able to see Chuks, a little bit smaller, a little bit more of a finesse player—he’s very, very well improved with his hand-punching. And I think Zach has done a good job all offseason of getting in shape and being able to compete throughout the whole practice. And I feel like he’s done well with his hand punch as well”.

Okorafor, taken in the third round of the 2018 NFL Draft, has two starts at right tackle, and several dozen snaps as a rookie lined up as an extra tight end. Banner was originally a fourth-round pick of the Colts in 2017, and has been in Pittsburgh since 2018. He has not started a game, but he has a couple hundred snaps under his belt as a tackle-eligible as well.

The Steelers are confident in the abilities of both men, though they also have the comfort of knowing that they can still fall back on Matt Feiler, a fourth-year veteran who has 25 starts a right tackle over the past two seasons, including 15 a year ago.

Still, their intention is for one of these young players to line up at right tackle all season, and they are prepared to stretch this competition out to the last moment before declaring a winner. Unfortunately, without the benefit of training camp access or preseason tape, we can only go by what we hear this time around, but I do believe either one will emerge as capable, and not a handicap.

After practice on Monday, which Okorafor sat out (he sat out yesterday’s practice as well with a groin issue), Mike Tomlin was asked about the fact that Watt go the better of Banner several times. Tomlin responded by pointing out that he got Okorafor several times as well, and does so against some of the best tackles in the league.

“At the end of the day”, Watt said for himself, “I trust my abilities and it doesn’t matter who they put out there”. He will be whoever the Steelers or any team has at right tackle. It’s what he does. But whoever is out there is going to get better because of him.

As a rookie, when he was working on the right side of the defense, Alejandro Villanueva, already a veteran and on the eve of his first Pro Bowl season. All the way back in June that year, Villanueva said that “it’s annoying to go against a guy like that”, a relentless defender who showed maximum hustle and took no plays off.

Of course, Watt went on to become a rookie starter, keeping James Harrison on the bench and making an immediate impact, beginning his three-year development arc into one of the best players in the game. And now he’s playing a key role in developing, perhaps, the Steelers’ right tackle of the future.