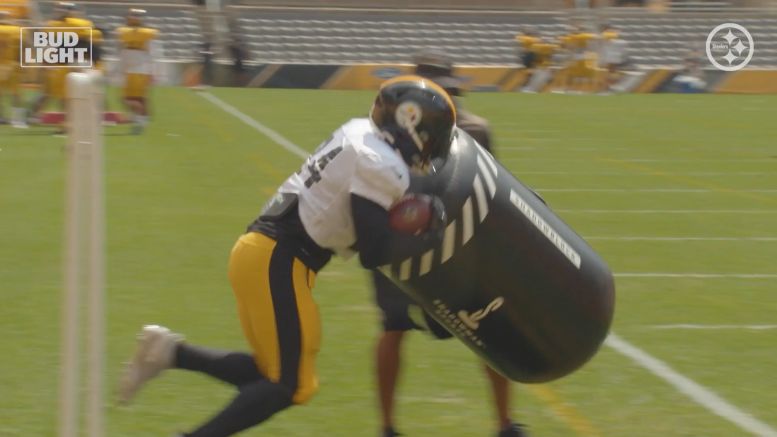 There are few things that Pittsburgh Steelers fans love more than a big back. Benny Snell is perhaps the biggest back on the roster. But even he’s toned himself up as he heads into his second season, something that his teammates and his coaches have taken note of as he looks to take his game to the next level.

Offensive coordinator Randy Fichtner was subjected to questioning by the media yesterday before practice, and while the vast majority of the conversation was steered toward quarterback Ben Roethlisberger, they did spare some time toward the end to talk about the running backs.

He was asked specifically about the depth of the position and whether they would focus on James Conner as the lead or if they would look to specialize. Fichtner didn’t necessarily give a clear answer, seeming to partially affirm both possibilities, but he did spare time to heap some praise onto the second-year back out of Kentucky.

“Where Benny Snell is right now, his growth in his second year, it’s just things that kind of come, and growth that happens over the course of one seasons”, he said of what he sees as largely natural progression for a maturing young player. “He’s put himself in a really unique situation because he’s really in good condition, and his usefulness and his knowledge is getting better every day”.

From all appearances, it appears as though Snell is in position to be the Steelers’ number two back. He already had the second-mots touches last season, if I’m not mistaken, or at least was very close to Jaylen Samuels, but that also had a lot to do with the time that Conner missed.

The interesting thing about Snell’s playing time last season was that he was rarely on the field and not being used. He touched the ball on more than two thirds of the snaps that he played. This year, I believe, the coaches will be much more comfortable people him on the field in more generalized situations.

Though seemingly pigeonholed as a ‘big back’ for his voluminous career at Kentucky, he has shown signs of developing into a complete three-down back. He does have solid enough hands and elusiveness, and has the power and smarts to be effective in pass protection.

The biggest question really is how much Conner is going to play, because when he’s on the field, he’s typically been a workhorse back. He frequently hit 85-90 percent usage in games during his Pro Bowl season in 2018, so if that is how they envision him for 2020, then Snell and the rest of the backfield isn’t going to play very much anyway.