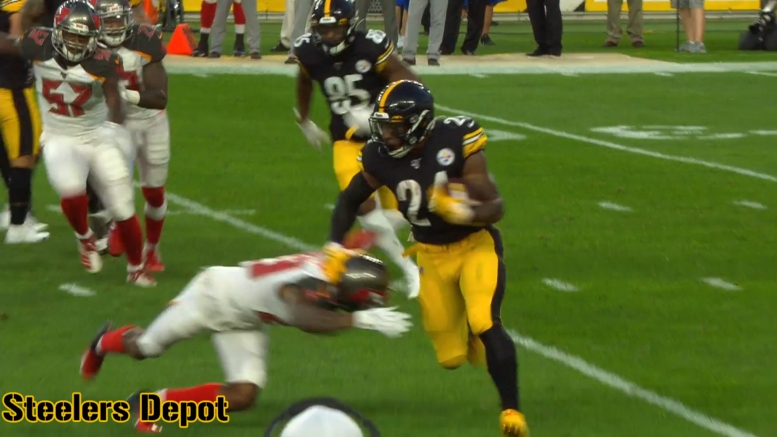 Benny Snell isn’t a guy who is much used to sitting on the sidelines. During his three seasons at Kentucky, for example, he amassed 737 carries, with 766 touches in all. He had over 300 touches in his final, junior, season in 2018 alone, during which he totaled 1554 yards from scrimmage, including 1449 rushing yards on 289 carries.

So dropping down to just 166 snaps played during his rookie season with the Pittsburgh Steelers was a new experience for him, even if he did record 111 touches, meaning that he touched the ball on just over two thirds of his snaps, a remarkable ratio.

The lack of consistent playing time makes it even more difficult to, what Mike Tomlin would say, get off the emotional roller coaster. Try as they might, athletes are emotional players, but they have to resist the temptation of riding the highs and lows of their successes and failures.

“The biggest lesson I learned is you have to forget about the negative plays or the negative things that try to affect your play when you are on the field”, he told Teresa Varley about his rookie season. “I learned really fast in the NFL you have to be a kind of forget guy. It’s always about moving on to the next play and staying focused on winning the game and the long haul of the season”.

During the 2019 season, Snell recorded 426 rushing yards with two touchdowns on 108 carries. While he had three rushes of 20-plus yards, and nine rushes with double-digit yardage, he also had 19 carries in which he didn’t gain any yards, including nine in which he lost yardage instead. He lost a fumble on one of those carries.

“It definitely is hard because you are really anxious to see success when you are at practice going through it with the guys”, he said about having those lows that you want to respond to, but as a reserve lack the immediate opportunity. “It’s a long road and it’s a rollercoaster. It’s all about staying level”.

Snell wasn’t actually supposed to play as much as he did as a rookie, but it became necessary with James Conner dealing with multiple injuries throughout the year. On top of that, Jaylen Samuels also had a knee injury that kept him sidelined for a bit, and he struggled when he returned.

The Kentuckian also had a knee injury, similar to Samuels’, which required an in-season clean-up procedure as well. However, he was able to respond to that well, and generally had a successful rookie season. The question now is what he can offer as a follow-up…and what sort of opportunities he will have to make his case.