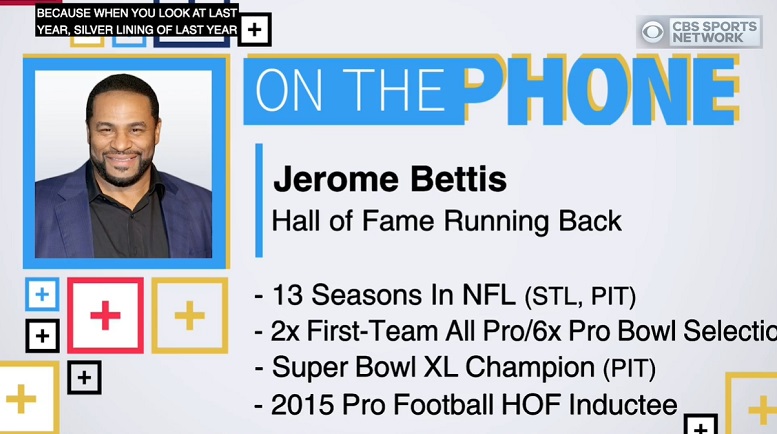 Are the 2020 Pittsburgh Steelers poised to be one of the best teams in the NFL this coming season? With the experience that they have on their roster and quarterback Ben Roethlisberger returning from the elbow injury that cost him most of the 2019 season, many certainly expect that to be the case and for the Steelers to potentially compete for another Lombardi Trophy. Hall of Fame running back Jerome Bettis certainly expects his former team to be very good in 2020 and he said as much during a Wednesday appearance on the Tiki and Tierney show on CBS Sports Radio.

“I see this team as really a dominant football team,” Bettis said Wednesday of the 2020 Steelers. “They have that ability because when you look at last year, the silver lining of last year was the defense. It came on strong. They had a playoff caliber defense, ok. Because they had zero offense, because when your quarterback struggles, you’ve got no chance. But the defense kept them in every game that they played because they found a way to be competitive defensively.”

While the Steelers offense certainly did struggle last season with backup quarterbacks Mason Rudolph and Devlin Hodges under center after Roethlisberger was lost just six quarters into the schedule, Bettis sees the return of the veteran quarterback that he played with for his final two seasons in the NFL being a huge factor in Pittsburgh potentially returning to the top of the AFC in 2020. Bettis also thinks wide receiver JuJu Smith-Schuster will go back to being the player he was prior to 2019 with Roethlisberger back in charge of the offense in 2020.

“Now you add a Ben Roethlisberger and now you add the group of receivers that they have, and I will say this about Juju Smith-Schuster, people say, ‘well, he didn’t really step up.’ How can you when you don’t have a quarterback throwing you the football?” Bettis asked. “It’s unfortunate that, I mean, how can you take the next step when you don’t get balls consistently?

“You know, that’s the hard part. So, it looks as though he took a step back, but in actuality, he really didn’t have the opportunities that he will have with Ben at the helm. So, I’d say that this offense is going to be a whole lot better than it was last year. So, you put a good offense with that defense, now you’ve got something.”

With Bettis seemingly putting a lot of stock in the Steelers being very good in 2020 because of Roethlisberger being back healthy, he was asked how he’s sure the quarterback can deliver at an acceptable level with him coming off of such a serious injury and at his age. Bettis essentially replied that Roethlisberger just needs to be three-quarters of what he was prior to suffering his injury for the Steelers to be serious competitors in 2020.

“It is a tough injury, but if he [Roethlisberger] can come back and be 75 percent of the player that he was [the Steelers will be fine],” Bettis said. “You need a veteran guy who can manage the game. And if he can go out, if he can throw it 20 to 30 yards, you don’t need the deep balls all the time. They’re going to be able to run the football. You’ve still got a really good offensive line. You have the ability to run the football. But when you don’t have a threat to throw the football at quarterback, then the offense is one dimensional. If you just get 75 percent of what Ben was, I think you’re still going to have a highly functional offense with threats all over the football field.”

It’s certainly hard to argue with a lot of Bettis’ analysis concerning the Steelers potential in 2020. He hit on the main things and that includes the defense expected to be great in 2020 and how the return of Roethlisberger from injury should lift the entire offense back up to a more than competitive level. I’m not convinced, however, that Roethlisberger being just 75 percent of his old self will be enough to do that. Hopefully that percentage is much closer to 100 percent than it is 75 percent.