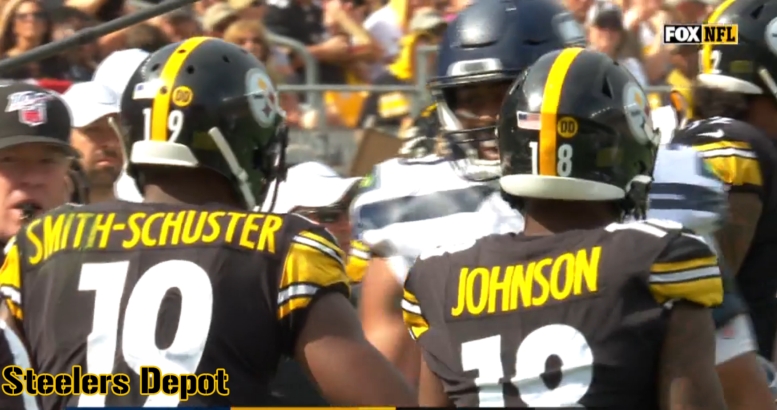 Topic Statement: The Steelers offense does not need a ‘number one receiver’ in order to be successful and productive.

Explanation: Amid questions over whether or not JuJu Smith-Schuster is truly capable of being a ‘legitimate number one wide receiver’ in the vein of Antonio Brown, Julio Jones, and others, there is a similar question as to whether or not it’s necessary for a successful offense to have a clear number one target, as the Steelers have stocked up on early-round wide receivers.

The Steelers offense had a few productive years during the Killer Bs era with Brown seeing between 150 and 200 targets every year, but that doesn’t necessarily mean Brown was required to be in that role. Having a multiplicity of valid options can actually be the superior route, relying upon offensive mismatches moreso than the individual skill of your targets, one in particular.

This offense is well-suited to move away from the ‘number one receiver’ model because they now have a stable of qualified and talented wide receivers who could share an even workload between Smith-Schuster, Diontae Johnson, and James Washington, with Chase Claypool as a rookie supplementary target.

Importantly, the tight end figures to feature more heavily in the offense this year with the acquisition of Eric Ebron, who, paired with Vance McDonald, should draw a decent amount of attention and targets. If Smith-Schuster is not open, there are plenty of other options.

Whether it’s Smith-Schuster or somebody else, perhaps Diontae Johnson, every great offense has that player that can be relied upon in the clutch to make the improbable play. Brown was that guy. Smith-Schuster has even shown glimpses of being that guy. Johnson could end up being the guy. The guy that you throw to, even if he’s not necessarily open, when you need a play.

It’s great to have a bunch of guys you can get 80-100 targets to and spread the ball around, but who is going to win their matchup in a crucial moment, consistently and reliably? If you don’t have that, you have a major weakness.