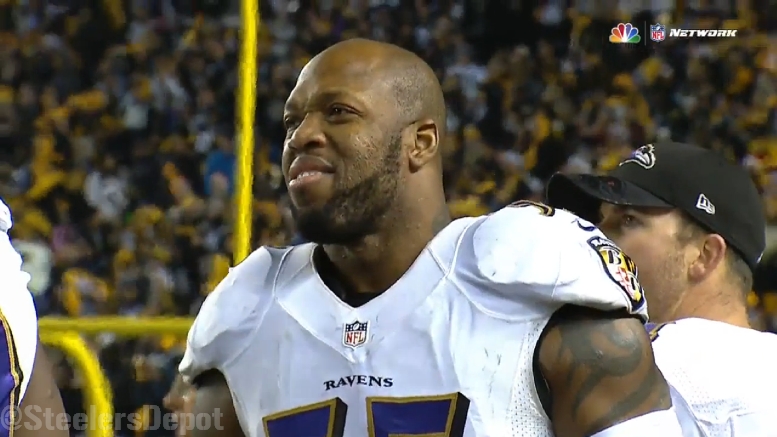 When it comes to division rival, there is no player who has caused the Steelers more fits than Baltimore Ravens pass rusher Terrell Suggs.

Head to Pro Football Reference and search for the pass rusher who has racked up the most career sacks against the Steelers. Recognize the name at the top of the list? Surely you do and the Steelers do as well. The man known as T-Sizzle, Suggs has (excuse my language) played with a fire under his ass when he comes up against his AFC North counterpart.

While now 37-years old and well past his prime, there are two time periods where it seems that Suggs would just flat out dominate. That occurred from 2006-2011 and anytime Suggs’ Ravens met the Steelers in the postseason. Betting on the former Ravens’ pass rusher notching a sack or big play during anyone of these two periods would have surely made you a very rich man.

From 2006 to 2011, the former Ravens’ pass rusher participated in 11 games against the Steelers. He registered 11 sacks across those 11 games. Suggs’ dominance during this six-year span may have kept the Steelers’ offensive line up at night as they knew they were dealing with a man on a mission.

Talk about a beating. With 11 sacks, 19 quarterback hits, three forced fumbles and even one interception (which came during a crucial 2011 matchup), Suggs was instrumental in the Ravens’ success during this time period. The Ravens were 6-5 against the Steelers over those 11 games and won the AFC North twice in six years.

While the Ravens have not had much postseason success against the Steelers during Suggs’ tenure, going just 1-2, the pass rusher still made his presence felt. In three postseason games against the Steelers, Suggs got to the quarterback five times, while also recording five tackles for a loss, an interception and a forced fumble which led to a defensive touchdown.

Though Suggs may have sizzled out following the 2011 season, recording just 1.5 sacks over his last 13 games against the Steelers, this was a nearly unstoppable player during his prime. A fixture of the prestigious yet brutal rivalry between these two divisional rivals, Suggs was a major reason why the Ravens were able to hang with the Steelers for the better portion of the last decade.