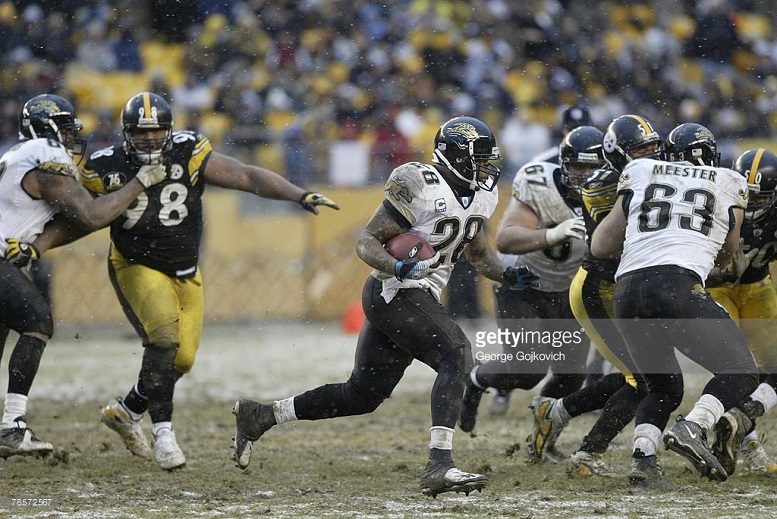 The Jacksonville Jaguars have given the Steelers fits throughout the years and perhaps no player has been as consistent as running back Fred Taylor.

The Steelers’ defense has always prided itself on being able to stop the run and during the early portions of his career, Taylor looked like another running back that would be unable to break through the daunted Steelers’ defense. But oh how fast that would change.

Over his first four career against the Steelers, Taylor would muster just 190 rushing yards on 64 carriers. Then came November 19 2000 – a historic day for both the Jaguars’ running back and for the Steelers’ defense. While Taylor found himself on the right side of the record book for his performance this day, the Steelers could not say the same.

In a week 12 matchup during the 2000 season, the Jaguars’ running back not only broke through the Steelers’ defense, he ran away from them. Taylor rushed for 234 yards on 30 carries while adding four touchdowns as the Jaguars dominated in a 34-24 victory. Not only would this be the most rushing yards by a Jaguars’ player in franchise history but it still stands as the most rushing yards allowed by the Steelers’ defense ever.

Still the most rushing yards Pittsburgh has ever allowed.@FredTaylorMade carved up the Steelers in 2000, producing 248 yards (234 on the ground) and four TDs in a @Jaguars victory.

Most Rushing Yards In A Game Vs The Steelers Defense

One of the laws of the universe is that running backs typically do not enjoy much success against the Steelers defense. That is why when one does, it is a major concern and no running back inflicted more fear into the Steelers’ defense than Fred Taylor.