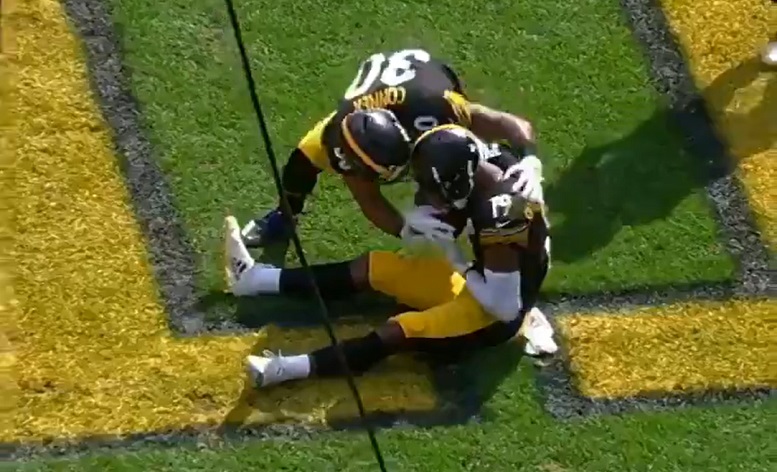 After a dismal 2019 showing, the Pittsburgh Steelers offense certainly could use huge bounce back seasons in 2020 from wide receiver JuJu Smith-Schuster and running back James Conner, both of whom misses considerable amounts of playing time last season due to injuries. Will both ultimately bounce back in 2020 and produce numbers similar to, if not better than, the ones posted by each in 2018? Jason La Canfora of CBS Sports likes the chances of one of them to do just that.

On Wednesday, La Canfora took a shot at trying to identify a few NFL players that he believes are in store for serious bounce back seasons in 2020, and some he thinks won’t. Smith-Schuster and Conner were two of the 12 players that La Canfora addressed in his post with the former being the one of the two Steelers players he expects to rebound in 2020.

Here is what La Canfora predicts for Smith-Schuster in 2020:

“He gets to play with an NFL level QB this year, and even an aging Ben Roethlisberger is a massive upgrade over the service this receiver could rely on a year ago. Are there some reasons to worry about a 38-year old QB coming off season-ending elbow surgery? You betcha. But the additions at tight end will force teams to roll off of JuJu a bit and we know this guy has great chemistry with Ben and I expect him to post numbers in line with a No. 1 WR in 2020.”

After an inconsistent start to the 2019 season, which included him catching 30 passes for 443 yards and 3 touchdowns in the Steelers first seven games, Smith-Schuster went on to catch just 12 more passes for 109 yards and no touchdowns in the team’s final nine games. Four and half of those final nine games he missed with a knee injury and it certainly didn’t help that most of his playing time throughout the 2019 season was with a quarterback not named Ben Roethlisberger.

If healthy in 2020, Smith-Schuster should be expected to have a season much more like the one he had in 2018, that included him catching 111 passes for 1,426 yards and 7 touchdowns. While 100 or more receptions for 1,300 or more yards might be a little too much to ask for the Steelers fourth-year wide receiver out of USC, at least 90 receptions for at least 1,100 yards seems very plausible for Smith-Schuster with Roethlisberger expected to return to his preinjury form as well.

As for Conner potentially rebounding in 2020, La Canfora isn’t bullish on the Steelers running back being able to accomplish that. Below are his thoughts on Conner in 2020 and why he has labeled him as a fallback candidate instead of a bounce back one like Smith-Schuster.

“The Steelers offensive line ain’t what is used to be. Will Maurkice Pouncey stay healthy and play at an All-Pro level anchoring that unit? For the first time in a while there is open competition at multiple spots. The run game was a big problem last year, Conner is in tremendous shape but runs upright and takes on a lot of hits and durability has always been a concern there. He is in a prove it year to get paid and Big Ben’s return will force some defenders out of the box but this offensive attack ain’t what it once was and the days of piling up the yards and points with Antonio Brown and Le’Veon Bell are long gone. This is a defense-led squad now and I don’t see an explosive season for Conner.”

For clarification, Conner, who missed six plus games last season with shoulder and quadricep injuries, rushed for 464 yards and four touchdowns last season with all but 84 of those yards coming in the Steelers first seven games of the season. Conner also had registered 29 receptions for 236 yards and another two touchdowns prior to injuring his shoulder in Week 8. In short, the former third-round draft pick out of Pittsburgh was on pace to come close to matching the 1470 total yards from scrimmage that he produced during his 2018 Pro Bowl season prior to suffering his shoulder injury.

The knock on Conner since he was drafted is his ability to stay healthy a full season. That knock is a legitimate one at that as he’s missed 11 full games and parts of several others in his first three seasons in the NFL. If he can’t stay healthy in 2020, he’ll obviously be hard pressed to match his 2018 career season. However, should Conner ultimately be able to be his healthiest in at least 14 games in 2020, he should have a great chance at matching, or even bettering, his career high numbers from a few seasons ago.

Roethlisberger, Smith-Schuster and Conner all staying healthy in 2020, combined with the continued maturation of several younger offensive players and the expected output provided by new tight end Eric Ebron, should produce solid results for the 2020 season and maybe even a lot better than what La Canfora seemingly expects on that side of the football for the Steelers.