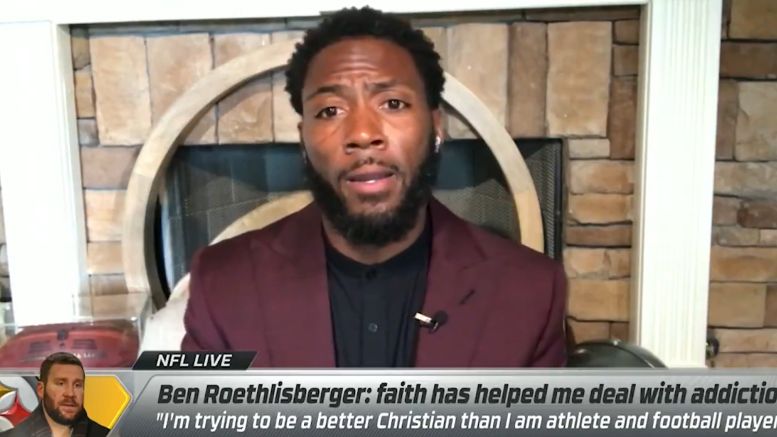 This was a story I wasn’t going to cover. For one thing, I didn’t think it was particularly significant. For another, I thought it was rather personal and sensitive in nature. But everybody else already picked it up, and there was a response to it that I wanted to share.

I’m sure very few of you watched the ManUp event recently in which Ben Roethlisberger participated, but you’ve probably seen the articles from other outlets in which he acknowledged, while speaking about his relationship with his religion, that he has experienced battles with addition to alcohol and pornography, or at least what he would classify as addictions relative to his interpretations of the teachings of his faith.

This story got covered far and wide, probably even outside of the realm of sports once it got out there. I wasn’t going to talk about it, until I saw what Ryan Clark said, and that’s what I want to share here, while he appeared on NFL Live for ESPN, with Roethlisberger’s admissions as the subject of conversation.

I don’t really want to comment on whether it surprises me or not. I hate us for this, I hate myself for having to speak on a man being vulnerable, a man being human and sharing his testimony, sharing his story with those that he can inspire. And now you have to get on TV and talk about whether you expect it or if you could see this, and I’m not gonna do it.

I don’t necessarily believe that we have the right to judge, to critique, to criticize, or do anything with his personal moments that weren’t for us. This wasn’t even for our consumption…For me, I’m happy for him that he is trying to grow. I’m happy that he’s tried to grow from when he was a rookie until now. I’m glad that he’s sharing his personal struggles with people in hopes of trying to build them, in hopes of trying to build better men, but as far as anything else that has to go into it, that is for Ben, and I’m gonna leave that for Ben.

A story broke about Ben Roethlisberger sharing a story of his struggles with certain demons during a Christian Conference zoom call. I was asked about it today, & it was one of those moments that I knew was bigger than football.. here’s how I answered. pic.twitter.com/4eoDX9593a

The ManUp project is a community even that seeks to address fatherlessness, in this case in the Pittsburgh area, and religion has been a part of the project since its inception, founded by Pastor Ed Glover.

During his segment, Roethlisberger was opening up about his experiences with religion and how it has led him to come to grips with certain aspects of his life and how that ties into his responsibilities as a father.

This was a specific and contextually important discussion of an otherwise private topic. It’s one thing to subsequently cover it, if one chooses to do so, but it’s another thing entirely to turn it into some type of topic for debate and as a coloring in of his overall character.