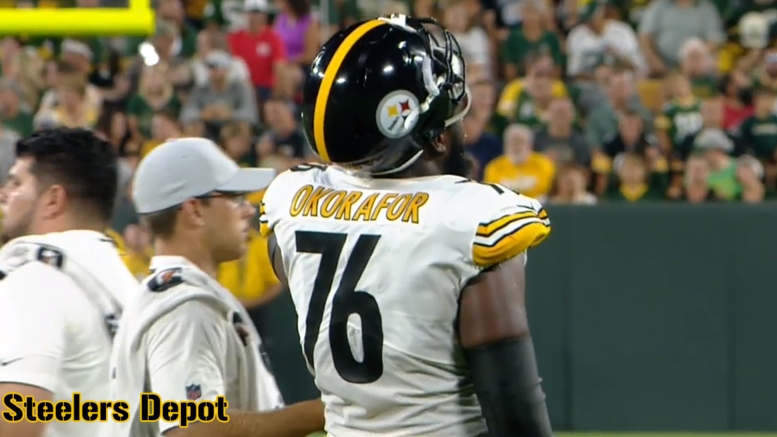 Reasoning: Mike Tomlin said that the Steelers’ first offensive line combination of training camp is going to include Matt Feiler at left guard, which means Okorafor and Zach Banner will be afforded an early opportunity to take hold of that job.

While we haven’t gotten the chance to hear a lot about the football aspects of this football season—we’ve certainly gotten a few earsful of everything else—one thing that we have heard a few different times going back to February or at least March is the idea that Matt Feiler could move over to left guard.

This was cemented as a possibility with the retirement of Ramon Foster, which no doubt the team was aware would be coming before it happened. Perhaps even knew it was a possibility during the 2019 season, which could have been one reason they looked at Feiler at left guard for one game.

Anyway, the long and short of it is that the more time Feiler spends there, the more time Okorafor spends with the starters working at right tackle, and the more chances he gets to show that he is capable of being a starter.

Now, that doesn’t guarantee anything, for either himself or for Banner, nor does it guarantee that one of them will start rather than Feiler staying there. After all, Feiler didn’t spend much time there last year in the offseason, in part to give others the opportunity to compete for the job.

Entering the offseason with this look may or may not prove to be significant, but I choose to think it is at least in part a reflection of their desires. They would love for one of their young tackles to show this offseason that they can start there, and that Feiler can stay inside. So this is perhaps a positive early sign.