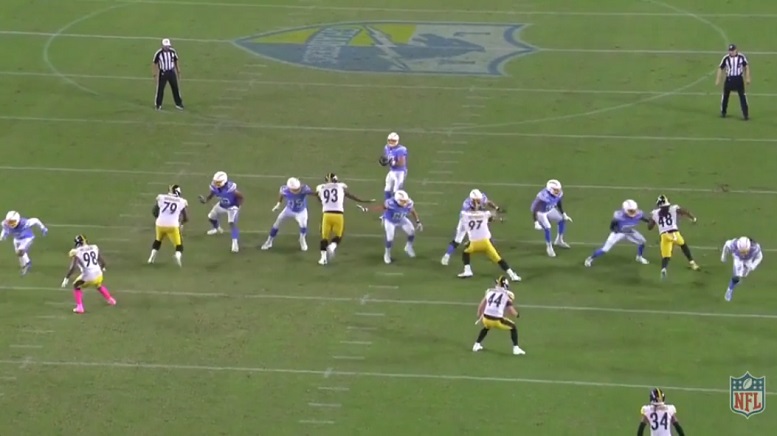 On Monday, I took a statistical look at how the Pittsburgh Steelers defense fared in 2019 against the run with three defensive linemen on the field and with Daniel McCullers manning the nose tackle position. Today, thanks the exquisite defensive charting done last season by Alex Kozora; I can look closer at how the defense performed last season against dropbacks with McCullers in the middle of a three-man defensive linemen front.

In total, McCullers was on the field for 37 total dropbacks last season when lined up at nose tackle. Of those 37 dropbacks, opposing quarterbacks completed 22 of 36 pass attempts for 335 yards with no touchdowns and two interceptions. Of those 22 completed passes 21 resulted in a successful play and that means 56.8 percent of the 37 total dropbacks resulted in successful plays. Additionally, the lone scramble, which came in the Week 17 regular season finale against the Baltimore Ravens, was also a successful play as it gained 4 yards on a 1st and 10.

The Steelers defense failed to register any sacks on those 37 total dropbacks so if you’re scoring at home, those 36 pass attempts resulted in an adjusted net yards per passing attempt stat of 6.81, which is quite high.

For what it’s worth, Kozora charted seven total quarterback pressures on those 37 total dropbacks and McCullers was credited with two of those. I have the all-22 end zone views of both pressures for you to see below. The one against the Los Angeles Chargers in Week 6 also resulted in an intentional grounding penalty. Also, one of the two pass attempts that resulted in an interception happened against the Ravens in Week 5 and that was the tremendous play down the field made by inside linebacker Devin Bush.

As I did with the run play stats in my Monday post, I need to pass along that defensive end Tyson Alualu was on the field with McCullers on 26 of the 37 total plays. 13 (50%) of those 26 plays were successful ones for the opposing offense. Javon Hargrave was also playing defensive end on 10 of those 37 total plays and 5 of those dropbacks resulted in the defenses not allowing a successful play. All 37 dropbacks came on either first or second down as well.

Once again, McCullers isn’t entirely to blame for the Steelers defense not faring well against dropbacks when he was on the field as part of a three-man defensive front. Additionally, a 37-play sample size is quite small.

What has been proven in these last two posts about McCullers and his 2019 usage in the Steelers defense in the middle of a three-man defensive front? Other than the fact that the defense didn’t play well on those 87 total snaps, not much at all. Moving forward into the offseason we’ll look deeper at the tape of the 131 total defensive snaps played by McCullers in 2019 for possibly more concrete evidence as to why the Steelers defense wasn’t up to snuff whenever he was on the field.