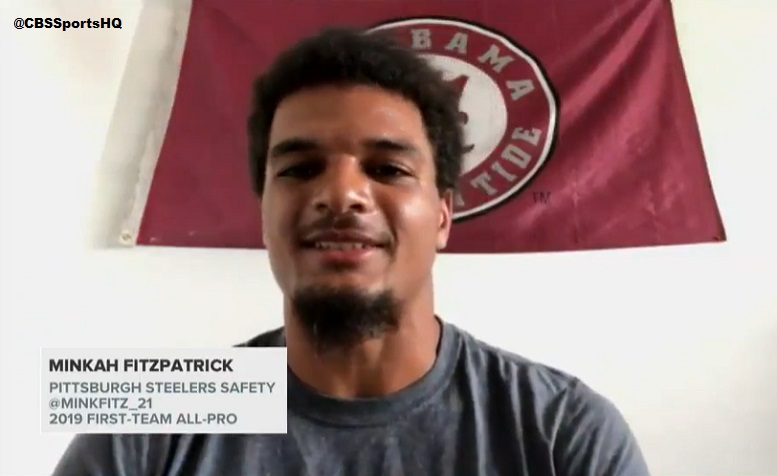 Pittsburgh Steelers safety Minkah Fitzpatrick had a phenomenal 2019 season with the team after arriving to them via a Week 3 trade with the Miami Dolphins. In fact, Fitzpatrick was voted a First-Team All-Pro for 2019 after registering five interceptions, a forced fumble and two fumble recoveries in the 14 games that he played with the Steelers. Oh, he also scored two defensive touchdowns last season as well. So, what is Fitzpatrick hoping to accomplish this offseason that will ensure he has a great follow up season in 2020?

“One thing that I’ve really been trying to focus on is just the details of the game,” Fitzpatrick told former Steelers cornerback Bryant McFadden Saturday morning on CBS Sports HQ. “Last year, I came in two weeks into the season and I didn’t really have a grasp of the details of our scheme. You know, we don’t run a super complex system, but it is a difficult system. And when you know the details and you know what everybody is doing around you from the front line to the other corner, to the other safety, it allows you to play faster.

“And I’m instinctive player and I rely on knowing what people are doing around me so I could also rely on my instincts. But last year I wasn’t really able to do that until the latter end of the season. And I feel like this offseason, I’ve been watching a lot of film of myself, of my teammates, just seeing how we play because we’re not together right now. So, I’ve just been watching a lot of film and breaking that down and understanding the playbook more so I can just go out there and play even faster than I did last year.”

It’s exciting to think about Fitzpatrick paying even faster in 2020 than he did in 2019. Additionally, it will also be interesting to see how much he’s moved around in the defense in 2020 as most of his 2019 season with the Steelers was spent with him playing way outside the box as a free safety, the complete opposite of the way the Dolphins used him his rookie season and first two games of the 2019 season. He talked first on Saturday about how the Dolphins used him in their defense.

“My rookie year, I played nickel and I played corner and that was pretty much it,” Fitzpatrick told McFadden. “I did just a split like 70/30, between nickel and corner. And this past season, we got the new coaching staff they came in and they thought my skill set was best suited for strong safety. They wanted me to be like Patrick Chung, a player in the [New England] Patriot system. Patrick Chung’s a great player, a versatile guy, makes a lot of plays, but I knew that my skill set was different than his right now.

“But, yeah, they played me real close to the line of scrimmage, sometimes on the line of scrimmage, in the box playing the linebacker/strong safety type guy. In practice I was doing the same. I wasn’t really doing coverage; I was just doing taking on blockers and just learning how to adjust to different run schemes and stuff like that. And it was good and all, but I just didn’t think he was maximizing my skill set.”

Fitzpatrick went on to say how the Steelers went about fitting him into their defense after trading for him early last season.

“And then when I came to Pittsburgh, they immediately just plugged me into the free safety spot and said, ‘This is going to maximize your skill set by playing you back here. You’re an instinctive guy, you have range, you’re athletic and you go and get the ball, you like being around the ball. And we think that free safety is going to maximize that skill set,’ Fitzpatrick said.

“And I think this past season showed what my skill set actually is. I’m not a strong safety who’s taking on pulling guards and tackles and other stuff like that. I could do it, but it’s not going to maximize myself as a player. And I think that Coach [Mike] Tomlin and Coach Butt [Keith Butler] did a great job of studying me and making sure they’re maximizing, not just myself, but everybody else in the secondary.”

A year from now, Fitzpatrick will be eligible to have his fifth-year option picked up by the Steelers and it’s virtually guaranteed that will happen. With Fitzpatrick now entering his second season with the Steelers, his first full one with them, he should be poised to make a run at yet another First-Team All-Pro honor in 2020 and maybe even at the annual Defensive Player of the Year award as well.