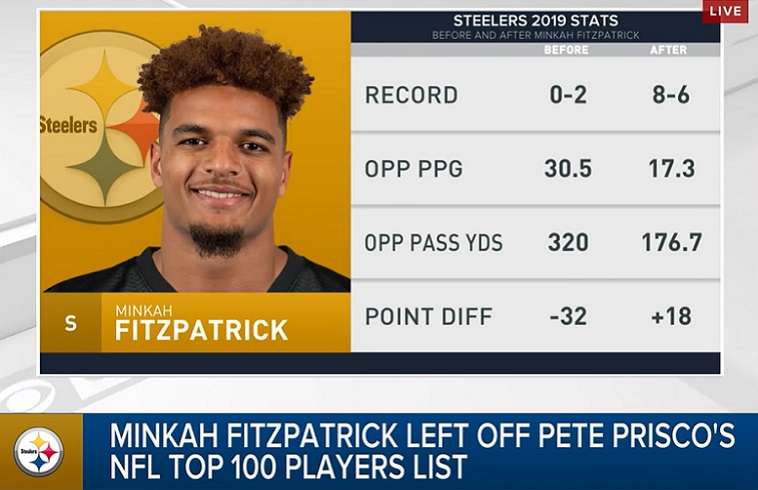 When CBS Sports NFL analyst Pete Prisco recently snubbed Pittsburgh Steelers safety Minkah Fitzpatrick from his top 100 players for 2020, it did not go unnoticed and especially by fans on social media. Even one of Prisco’s co-workers, former Steelers cornerback Bryant McFadden, took issue with Prisco leaving Fitzpatrick off his top 100 list. Steelers defensive captain Cameron Heyward also clapped back at Prisco on social media and surprisingly, so too did Fitzpatrick.

On Saturday, Heyward and Fitzpatrick joined McFadden on CBS Sports HG for an interview to discuss the snubbing of the Steelers safety by Prisco and at the end of it, the 2019 First-Team All-Pro and former first-round draft pick of the Miami Dolphins was asked what it means to him to have had so many fans of the team come to his defense of Prisco.

“It makes me feel good that we have a strong fan base,” Fitzpatrick told McFadden. “You know, they’re honestly the best in the world, you know what I’m saying? There’s nothing really like the city of Pittsburgh; lives and breathes sports. So, seeing some of the comments that they’re saying and just seeing them have my back was big to me.

It really didn’t take Fitzpatrick long to win over Steelers fans following his Week 3 arrival last season via a trade. In his first game as a member of the Steelers he registered five total tackles, an interception, and a forced fumble in the team’s loss to the San Francisco 49ers. Several more big plays were made from that point forward that included him scoring two defensive touchdowns.

Fitzpatrick figures to be a fan favorite for many years to come as well as the team will undoubtedly pick up his fifth-year option next offseason and then possibly sign him to a long-term extension sometime during the summer ahead of the start of the 2022 regular season.

“It definitely meant a lot to me and that’s why we go out there and play as hard as we do for those people that enjoy watching us play,” Fitzpatrick told McFadden about support he’s received from Steelers fans. “And like I said, it just means a lot to me and it’s deeply appreciated.”