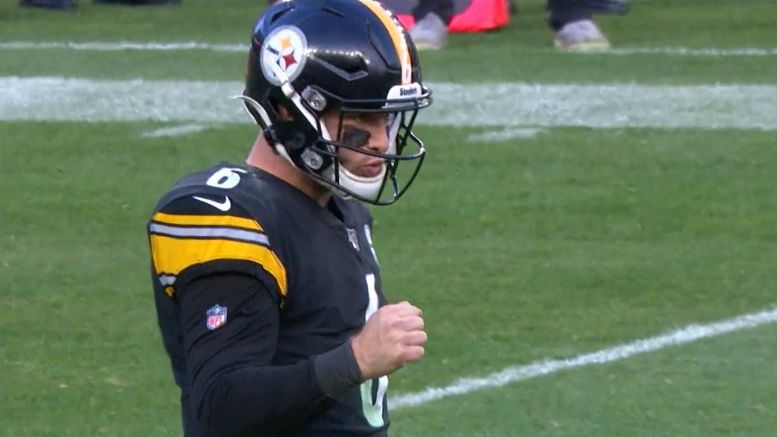 There aren’t too many players like Devlin Hodges, and that can be said in a number of ways. He certainly has his own personality, which you’re not going to find too many places in the league. He has a background that few have. In fact, he is the first undrafted rookie quarterback to ever win three games.

Whatever happens throughout the rest of his journey, that will always be part of his story, and that is something that he doesn’t take for granted. Because even though he has fervent belief in his own abilities, he understands how improbable his story has been so far.

“There’s still times today where I’m like, ‘this is still crazy’”, he told KDKA’s Bob Pompeani and Rich Walsh on Living Room Sports. “I always knew in my mind and in my heart, and I always believed in myself, that I could play in the NFL. Did I imagine it would happen like this, or it would happen this soon? I mean, no. I was ready for it. To this day, it’s still wild”.

Coming out of Samford was an FCS record-breaking passer, Hodges wasn’t drafted. He wasn’t even signed after the draft. The Pittsburgh Steelers invited him to rookie minicamp, and he earned a contract to the 90-man roster through his performance there, prompting the team to waive Brogan Roback as a result.

From there, he continued an upward ascent, drawing attention to himself not only with his play on the practice field but the demeanor with which he carried himself. Defenders like Bud Dupree have talked about the level of confidence that he displayed, even trash-talking the first-team defense when he got the opportunity to go up against them.

He continued to perform at or above expectations throughout training camp, and did well in the preseason, enough to keep his name on the rolodex. Even though he didn’t make the 53-man roster, his availability played a big role in the team’s willingness to trade Joshua Dobbs a couple weeks later, knowing that they could sign him.

After doing so, of course, Ben Roethlisberger went down. Suddenly he was the backup quarterback to Mason Rudolph, who then suffered a concussion. Hodges was playing meaningful snaps in an NFL game by the fifth week of his rookie year. He started the following week—and won.

Duck Season was born, and reached a fever pitch weeks later after Rudolph was benched due to performance. He led a comeback victory over the Bengals after taking over, and then he helped the team rattle off two more wins, putting the Steelers in position to secure the number five seed.

Of course, we all know how things played out from that point forward, but nobody should deny that that is a hell of a journey for a Samford quarterback during his rookie season. And he’ll have the opportunity this offseason to prove that there is an encore performance worth seeing that is better than the first.