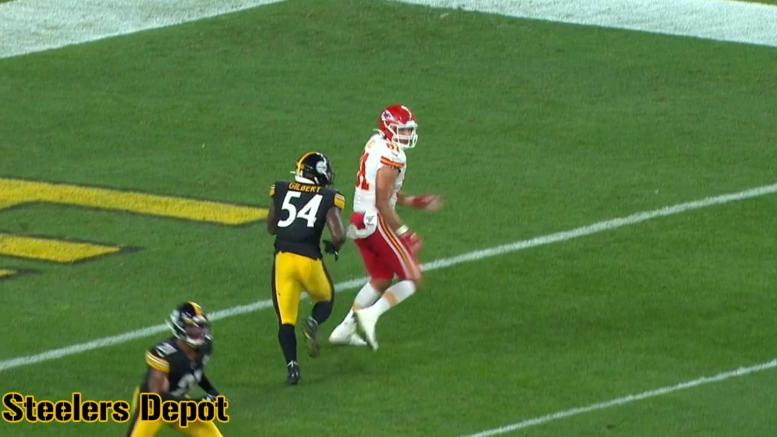 Pittsburgh Steelers fans were hoping that the team landed upon a diamond in the rough at inside linebacker in 2018 undrafted free agent Matthew Thomas. That uh…didn’t quite pan out, but perhaps 2019 sixth-rounder Ulysees Gilbert III can be the sort of player that many wanted Thomas to be.

The only thing is, he has to get all the way back from his back injury, first. Though he was successfully able to make the team’s 53-man roster as the fifth inside linebacker and one of 10 total linebackers, he ended up going on injured reserve about halfway through the year because of the aforementioned injury, which he confirmed to the team’s website did not require surgery.

Under normal circumstances, he would be spending a lot of his time right now at the UPMC Rooney Sports Complex working with the strength and conditioning staff on a rehab program with hands-on experience. Instead, he has to do his workouts at his own living quarters, following instructions sent by the team. But he says he’s doing well.

“The good thing is I am coming along very well”, he told Teresa Varley, while also lamenting the situation at hand. “I was back here for a while and everything was normal. We were making great strides to get me back right. I hated that we had to stop and not be in the training room, or weight room or facility, but we are still making great strides at home”.

“I am working out, eating right”, he added, while also noting that he’s been doing what we’re all doing, binging shows and taking naps, as well. “I am doing the things they have sent me to do. We are still making strides, I am feeling good, and I am happy about that”.

Through eight games, Gilbert had been tracking toward playing over 300 snaps on special teams if he had played the full season, and would have also been on pace to register double-digit tackles for his troubles. He actually only played in seven games, but was limited to a special teams-only role behind Mark Barron, Devin Bush, and Vince Williams.

With Barron and Tyler Matakevich gone, there is a lot riding on Gilbert to be a critical depth player this season behind Bush and Williams at inside linebacker, joined by Robert Spillane, who was on the practice squad at the start of the season and was called up to replace Gilbert after he was put on IR.

While it’s possible that the Steelers will address the position in the draft, they have limited resources this year that may be best spent elsewhere, but if they don’t, he is ready for the opportunity to step up into a bigger role, and come back from this injury.

“It’s things like that we take for granted that are a blessing”, he said. “I have a chance to come back. I can keep preparing and make sure I am ready. That is a blessing. I look on the positive side of things and not the negative”.