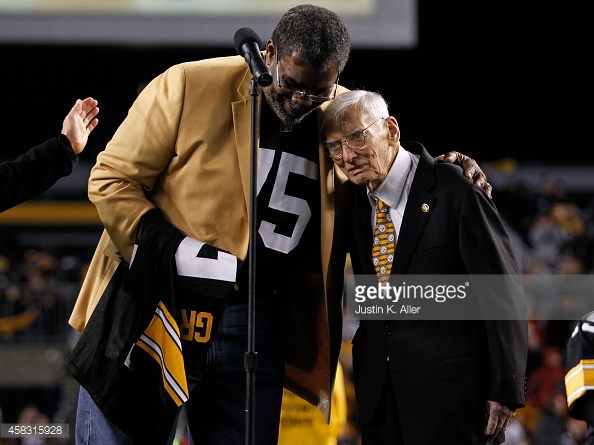 Terry Bradshaw sure has a way with words. The former Pittsburgh Steelers quarterback and Hall of Famer has garnered almost as much of a reputations for what comes out of his mouth than for what came off the release of his throws back in the 1970s. Of course, he’s now had a longer career as a broadcaster than as an athlete, so that should not be altogether too surprising.

He does open his mouth, for sure. He also gets criticized, heavily, when he does. Sometimes he gets called out for what he doesn’t do. More recently, he’s gotten negative press because of his decision not to attend the funerals of former team president Dan Rooney and his former head coach, Chuck Noll. He was on The Fan yesterday and he talked about just this, somewhat at length:

Well, if I’m worried about what people are going to measure me by because I don’t go to someone’s funeral, I wish I would have gone to the funerals. I just don’t go to funerals, period. I went to Joe Green’s wife’s funeral. He’s a teammate and that’s it. I believe that I handled it the way I wanted to handle it and you may not like it or appreciate it and I’m sure someone that’s got a lot more class than I have would have been there. I talked to a lot of people about not going to those funerals, but that doesn’t mean that I didn’t love and care for Mr. Rooney. Dan Rooney I didn’t know that well. I wasn’t close to Dan Rooney. And I worked for Chuck for all those years, but I wasn’t close to Chuck.

And having been gone from the city and the organization for so many years, I don’t know why people are so hard on me. Maybe they need to look at themselves and stop worrying about judging me. I’m a good guy. I’m not a bad person at all. I’ve had some horrible things said about me by a lot of writers there. I’ve had some terrible things said about me by Joe Gordon, our former PR guy who said I was the most selfish person he’s ever seen. Just critically biting things and I’m just like, ‘wow,’ you know.

That’s a pretty honest and forthright, not to mention blunt, answer. He both says that he doesn’t attend funerals in general, perhaps because he simply doesn’t like to (not exactly uncommon), yet also admits he didn’t have the closest of relationships with the deceased.

One thing we can always count on is that Terry Bradshaw is always going to speak his mind. For one thing, that’s his job, and it’s why they pay him. But ultimately, I just don’t think he can help himself. He can’t not give a genuine answer, at least in a setting like this.