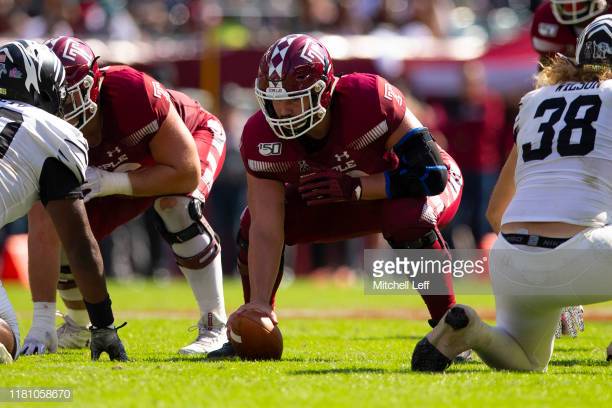 Our clues as to who the Pittsburgh Steelers may be interested in is much more limited this year than any other of the Kevin Colbert era. But Pro Football Network’s Tony Pauline is offering a bit of insight as to who may be on their radar.

Pauline, one of the best draft insiders, says the Steelers have interest in Temple OG/C Matt Hennessy and Charlotte EDGE Alex Highsmith.

From April 13th on Hennessy.

The Jets, who own the Giants’ selection in the third round, also have a lot of interest in Hennessy. I am told if they select Hennessey, it would be to play center.  Newly signed free agent Connor McGovern would then slide over to guard, the position many thought he played his best football at while in Denver.

The Atlanta Falcons, Dallas Cowboys, and Pittsburgh Steelers all have a significant interest in Hennessy.  Of that group, Pittsburgh projects him to guard.”

And yesterday on Highsmith.

“He was recently filmed completing 24 reps on the bench, a tape that was sent to teams around the league. Highsmith is drawing a lot of interest from the New York Jets, Atlanta Falcons, and Pittsburgh Steelers.”

As Pauline notes, the Steelers view Hennessy as a guard option which makes sense given their hole left by Ramon Foster’s retirement and BJ Finney signing with Seattle. Matt Feiler could – and probably will – shift over, as he did for one game in 2019, but adding Hennessy would give them another option and long-term help since Feiler is entering the final year of his deal. Maurkice Pouncey isn’t going to play forever either.

Highsmith burst onto the scene in 2019. Charlotte changed their scheme, let him play on the edge much more often, and it resulted in 21 TFL and 15 sacks. He’s viewed as a late Day Two or early Day Three pick, buoyed by a weaker edge class. Even before Pauline’s note, we knew the team had interest, FaceTiming with him during the pre-draft process.

Check out our scouting reports on both players below.