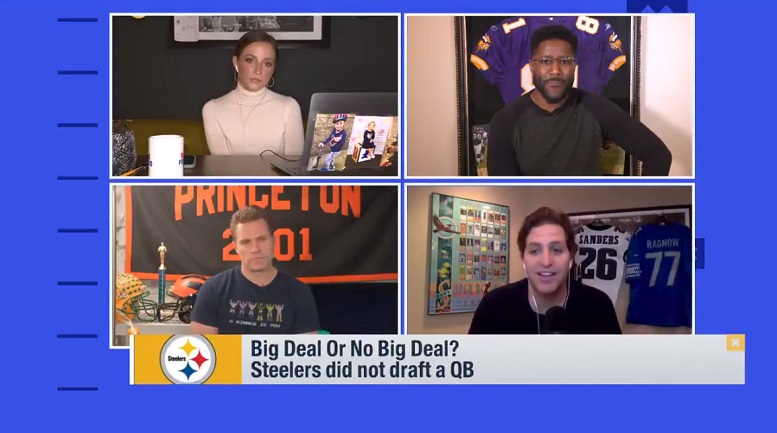 For most of the offseason, the Pittsburgh Steelers have had five quarterbacks under contract. Apparently, that’s not enough for several major media NFL analysts. On the heels of the Steelers not selecting a quarterback in the recently concluded 2020 NFL Draft, the analysts on the NFL Network’s ‘Good Morning Football’ all discussed if Pittsburgh not drafting a quarterback this year was a smart move.

Peter Schrager was the first to weigh in on the topic.

“Yeah, look, they certainly have a lot of faith that he [Ben Roethlisberger] can stay healthy,” Schrager said. That quarterback position is what actually kept them out of the playoffs last year and as much as we love Duck [Devlin] Hodges and the duck calls and Mason Rudolph and what he did, neither one of those guys were able to win a big game down the stretch. And now I’m looking at the current depth chart and it looks like a New Jersey diner menu. You’ve got Rudolph, you’ve got Hodges, you’ve got Paxton Lynch — J.T. Barrett’s on there. This feels a bit like the old adage: ‘Fool me once, shame on you; fool me twice, shame on me.’ And of course, I’ll let you guys do the George Bush President line afterwards. But I don’t know if you can go into this season without another quarterback option considering last year this was a playoff team. The defense was great, and they did not make it because of the quarterback.”

While I give credit to Schrager for knowing the five players on the Steelers quarterback depth chart, he obviously doesn’t remember that the team was without running back James Conner and wide receiver JuJu Smith-Schuster for a good portion of the second half of the regular season due to injuries. Heck, for quite a few games the Steelers were forced to use both a running back and wide receiver by committee approach. The team had deep depth chart wide receivers such as Johnny Holton and Deon Cain seeing meaningful snaps along with running backs Trey Edmunds, Kerrith Whyte Jr. and Tony Brooks-James. Sure, the backup quarterback play wasn’t great last season for the Steelers, but let’s not forget that a lot of valuable pieces of the offense missed a lot of time as well.

After Schrager was finished commenting on the Steelers failing to address the quarterback position in this year’s draft, Kyle Brandt had his turn at berating the team.

“At a New Jersey diner you can get a club sandwich and Oysters Rockefeller on the same menu,” Brandt said. “I think it’s a huge deal because I’m starting to crush on something. I’m starting to crush on the idea of the Pittsburgh Steelers and Cam Newton joining forces. That’s my new crush for Cam. Roethlisberger can’t stay healthy. Spoiler alert. I hope he does, he probably can’t. Cam goes there and will get it. And basically, Cam and Ben are kind of almost becoming the same guy — this big dude who takes a lot of hits and gets hurt and chucks it downfield and stays in the pocket for a long time. I would love to see that for Cam Newton in the next chapter of his career after Ben.”

These guys have been in quarantine way too long. Just like it was with Jameis Winston, there is no way that Cam Newton is going to sign on the cheap with the Steelers to be Roethlisberger’s backup. Besides, like Winston, he probably wouldn’t be a good fit in the Steelers locker room. While were on that topic, no, I do not believe that “report” that Winston recently turned down a more lucrative offer from the Steelers to instead sign with the New Orleans Saints. The Steelers brass from top to bottom has said all offseason that the team is happy with the current quarterbacks that comprise the depth chart and thers no reason to not believe that.

After Brandt said what he had to say, former NFL wide receiver Nate Burleson took his turn

“I’m right there with you. I love that idea. Superman [Cam Newton] and the city of steel,” Burleson said. “For me, I’m looking at Big Ben [Roethlisberger] and his influence on this team. So, if you’re asking me if this is a big deal or no big deal, it’s a big deal because I feel like Big Ben, he somewhat kind of orchestrated them not drafting a quarterback. If you look at him being banged up and then Mason and Devlin were not really doing their thing, they should’ve went quarterback. But what happened was, they looked back a couple of drafts ago when Mason Rudolph was drafted in the third round and Big Ben came out and was like, ‘Well, I’m surprised they took a QB in third round. I thought maybe we can get a player that can help us now. Nothing against Mason, I just feel like we can get a guy that can help us right now.’ He went on to say when asked, ‘Well what if Mason ask you a question?’ He said, ‘I might just have to point him to the playbook.’ So, he wasn’t going to mentor him. He wasn’t happy with the third-round selection. So, what if they did that again? Big Ben would’ve spoke out again. So, I think it’s a big deal because at his age, even being dinged-up, Big Ben is influencing the decisions that they make.’

While Roethlisberger probably wouldn’t have been thrilled had the Steelers drafted yet another quarterback with one of the team’s first several selections this past weekend, in no way does he influence what the team does or doesn’t do during drafts. Sure, I imagine he was counting on the team drafting an offensive skill position first this year and he even said as much a few weeks ago. Even if the Steelers had drafted a quarterback this year it would have had to have been Oklahoma’s Jalen Hurts in the second-round at No. 49 overall. And even had Hurts been the Steelers second-round selection, expecting him to be a potential 2020 savior should Roethlisberger go down injured a second consecutive season is beyond foolish.

The Steelers have the makings of having another very good defense in 2020. Additionally, with the return of a healthy Roethlisberger, Smith-Schuster and Conner, in addition to the offseason additions of tight end Eric Ebron via free agency and wide receiver Chase Claypool and running back Anthony McFarland Jr. via the draft, the Steelers offense should return to being one of the top units in the NFL in 2020. If Roethlisberger ultimately goes down injured again, well see if Rudolph is up to the task of being better than he was in 2019. In so many words, that’s a gamble the Steelers have been saying all offseason they’re willing to take and thus nobody should be surprised right now that no new quarterbacks have been added to the roster since the start of the new league year.

Like it or not, Mason Rudolph will likely back up Roethlisberger again in 2020 with either Devlin Hodges or Paxton Lynch being the team’s third-string option. That’s something that should’ve been understood since February.