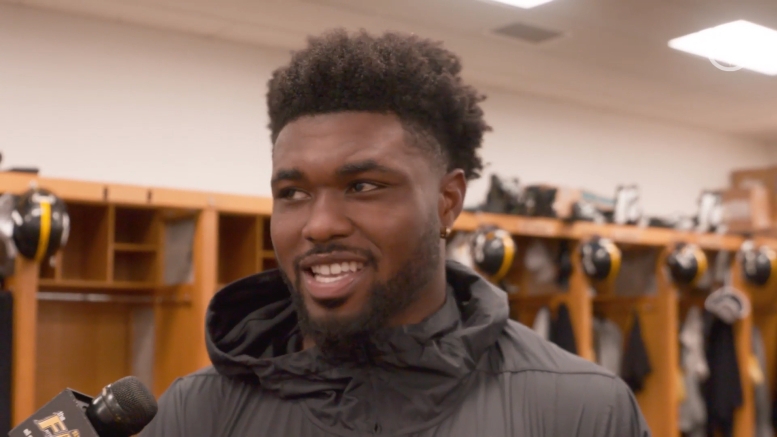 Perhaps no phrase resonates more with the culture of the Pittsburgh Steelers than ‘next man up’. While this phrase is typically used in situations where injuries leave opportunities for others to step up, it is not exclusive to just that situation. The ‘next man up’ philosophy has also become a business standard for the Steelers as well and there is a huge business opportunity waiting ahead for second year linebacker Ulysees Gilbert III.

Over the last few days, the Steelers have seen their inside linebacker depth thin out in serious fashion. Veteran linebacker Mark Barron was cut due to salary cap purposes after just one season in Pittsburgh and Tyler Matakevich, who has been an instrumental part to the team’s special teams’ unit, was just signed to a two-year deal by the Buffalo Bills. In just 48-hours, the Steelers lost 750-defensive snaps and 340-special teams snaps from their linebacking unit.

Without the money to make a serious splash in free agency to replace these snaps, the Steelers will likely have to look towards the draft or at an in-house candidate to help ease the loss. Should they rely on an in-house candidate, they have a young and hungry second year linebacker in Gilbert who can not only take another step forward on the defensive side of the ball but also on special teams.

The most likely scenario for replacing Barron’s 750-defensive snaps is that Devin Bush takes over in dime packages for Barron while Vince Williams sees a major increase in the amount of snaps played. Williams played just 42.2-percent of the team’s defensive snaps last season, his lowest total since 2016. While these two will likely account for majority of Barron’s lost snaps, that does not mean that there is not room for Gilbert to step into the role of the team’s third linebacker. Should either Bush or Williams miss time, Gilbert has the opportunity to become the team’s next man up at the position.

With Matakevich now off to Buffalo, there is a big hole on the Steelers special teams’ unit and if Gilbert really wants to rise through the ranks, he is going to need to grab this opportunity by the horns. Thankfully, he should get every chance to.

The time is now for the former Akron linebacker. Drafted by the Steelers in the sixth round of the 2019 NFL Draft, Gilbert had a promising preseason last year before he was placed on injured reserve due to a back injury. With the departure of two significant linebackers, Gilbert will now have the opportunity to continue putting together what he started last summer. In the land of opportunity, the time is now for Gilbert to be the next man up.