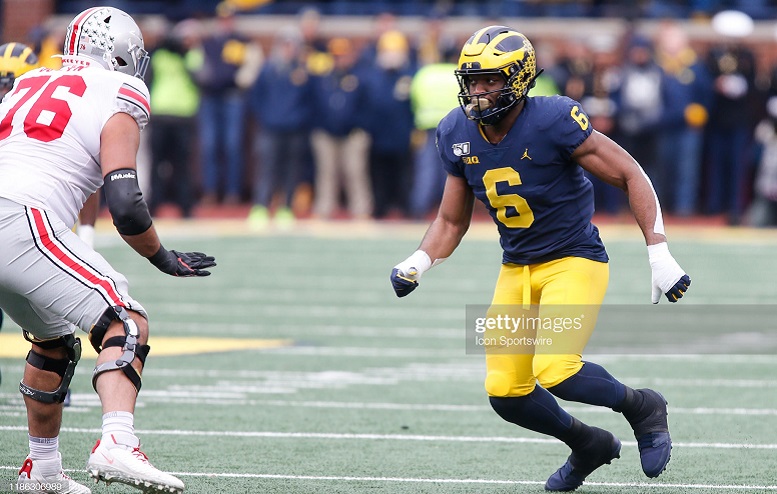 We’re starting to see a few more multi-round mocks get released by major media draftniks now that the 2020 NFL Scouting Combine is over with. On Wednesday, Dane Brugler of The Athletic released a three-round mock draft that didn’t include compensatory selections and that offering includes the Pittsburgh Steelers taking Michigan product Josh Uche in the second-round at 49 overall.

Brugler’s three-round mock draft doesn’t include very many selection explanations outside of the first round and thus his choice of Uche to the Steelers is just as is.

Uche to the Steelers in the second-round at 49th overall seems to be a very popular choice of both draftniks and fans to date. He measured in last week at the combine at 6012, 245-pounds with 33 5/8-inch arms and only did the bench press while in Indianapolis, IN due to a hamstring injury suffered during the week of the Senior Bowl.

In his four seasons at Michigan, Uche registered just 52 total tackles with 15.5 of those being sacks. Uche played sparingly in his first three years at Michigan as he logged right around 200 total defensive snaps during that span with roughly 150 of those coming in the 2018 season. This past season, however, Uche started nine games on his way to logging nearly 475 total defensive snaps.

During his combine media session, Uche said he believes he’s a linebacker that can play off-the-ball the first two downs and then go after the quarterback on third down. He went on to say that he mostly played the SAM linebacker, off-the-ball, at Michigan.

Josh Uche on where he might play in NFL pic.twitter.com/5QxiY9NEck

Is Uche a true edge/outside linebacker in a 3-4 defense? Probably not, or at least not yet. With him being only a one-year starter at Michigan, and based on the kind of successful production he had in his four years, he’s a tough player to evaluate and thus project at the NFL level.

Personally, I see Uche as a third or early fourth-round selection in this year’s draft. I think people guaranteeing him to be a second-round selection is a bit too bullish. Regardless of what I think, it’s likely that we’ll see Uche mocked to the Steelers quite a bit more between now and the 2020 NFL Draft taking place. I like the player, I just don’t like the idea of him being selected by the Steelers at 49th overall is all.

To best of our knowledge, Uche only had an informal meeting with the Steelers at the combine. That’s not too surprising, however, with Uche being at the Senior Bowl a few weeks earlier.

Below are the posts we’ve dedicated to Uche so far: