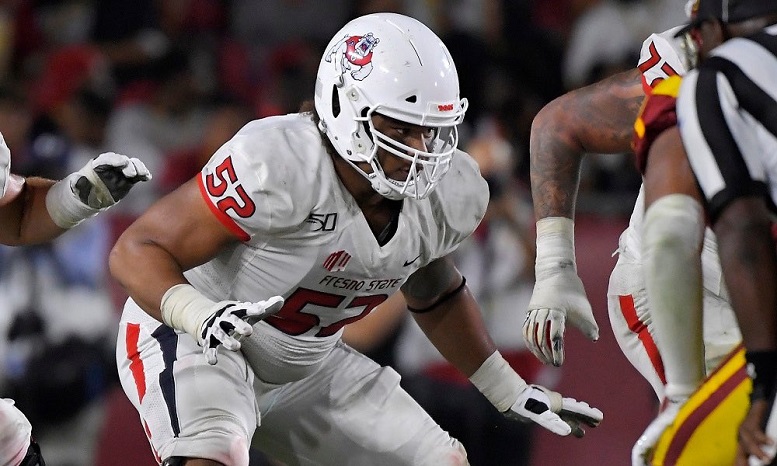 Which player is the best fit for the Pittsburgh Steelers at No. 49 overall in the 2020 NFL Draft? In a Thursday post by Pro Football Focus, they believe that player is Fresno State guard Netane Muti. Below is their detailed opinion on why Muti should be that player.

Not too many people are on board with Muti as IOL1 hype train, but that’s where we are at PFF. Muti comes in as the highest-ranked center or guard prospect on the PFF Big Board (32nd overall). Injuries have robbed us of seeing extensive action at the collegiate level — he has played just over 300 total snaps each of the past two seasons. What he showed in limited action those two years, along with impressive tape as a freshman in 2017 against NFL-caliber players like Ed Oliver, was enough for us. Muti recorded run-blocking and pass-blocking grades of 80.0 or higher in that 2017 freshman season. Putting up 44 reps on the bench press at the combine puts an asterisk next to the kind of power that he plays with.

The national consensus is lower on Muti, which could play into the Steelers’ favor after they traded their first-round pick to the Dolphins for Minkah Fitzpatrick last season. With Ramon Foster being a potential cap casualty at 34 years old after a down season and reserve interior offensive lineman B.J. Finney being a free agent, Muti could help fill one of the bigger needs on the team and potentially start as early as next season. His nastiness and strength on one of the teams with the most rushing attempts in the NFL in gap schemes last season would be an ideal fit. Muti should be a target for the Steelers on Day 2.

It’s certainly somewhat understandable as to why PFF believes Muti should be the Steelers first selection in the 2020 NFL Draft. However, while their overall reasoning is on point, they fail to mention the possibility of Matt Feiler moving from right tackle to left guard to help compensate for the potential offseason losses of both Ramon Foster and B.J. Finney.

Muti’s overall health the past two seasons is a big concern ahead of the 2020 NFL Draft as he’s played in just five games over the past two seasons after suffering consecutive season-ending injuries in 2018 and 2019. After suffering a ruptured Achilles in 2018 after playing in just two games, Muti played in just three games in 2019 before a Lisfranc foot injury ended his season.

At the recently concluded scouting combine in Indianapolis, IN, Muti, who measure in at 6027, 315-pounds, did 44 reps on the bench press, which tied him for the fourth most in that drill in the history of the annual event. It is worth noting, however, that while Muti has a nice hand size of 10 5/8-inches, his arms were measured at just 31 3/4-inches while in Indianapolis. Only three other offensive linemen at this year’s combine had shorter arms than Muti’s. Additionally, Muti measuring in under 6’3″ is also a bit of a concern.

Muti also only did the bench press at the combine. Reports, however, indicate that he’ll be able to do everything else that he skipped while in Indianapolis at his Fresno State pro day, which is scheduled to take place on March 17.

While Muti might currently be considered by many draftniks to be one of the top interior offensive linemen in this year’s draft class coming out of the annual scouting combine, his injury history and lack of ideal measurables, combined with the fact that he hails from a non-Power 5 Conference college team, really doesn’t make him a serious candidate to be the Steelers selection at 49 overall in this year’s draft. In short, it would be a huge surprise if Muti winds up being drafted by the Steelers in late April.