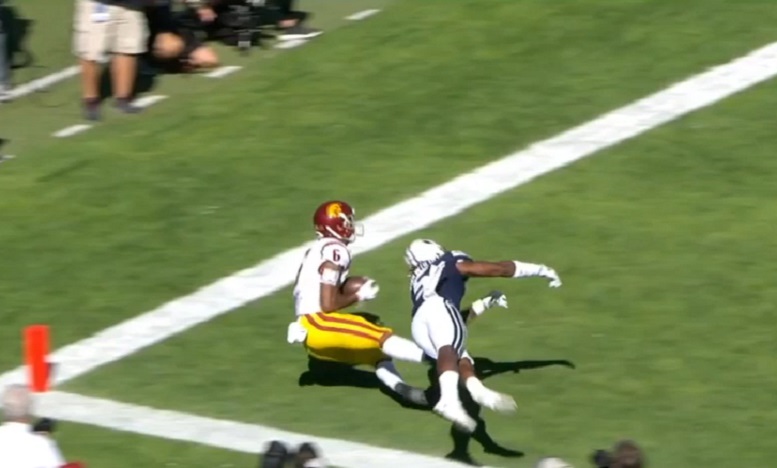 USC wide receiver Michael Pittman Jr. showed up as one of two players that fit what the Pittsburgh Steelers look for at that particular position when it comes to measurables, according to our very own Alex Kozora. With that study of his now completed, it’s a perfect time to take a closer look at Pittman and his overall game via a substantial contextualization of his 2019 targets.

In total, I contextualized six of Pittman’s 2019 games and those were against Fresno State, BYU, Utah, Washington, Colorado and Iowa. In those six games, Pittman registered 42 receptions for 629 yards and six touchdowns.

While I have Pittman down for four drops in these six games, I really don’t see him as having a huge problem when it comes to that. A few that I graded as drops where poorly placed throws. I view him as having nice, reliable hands.

Pittman’s average target distance on these 51 total contextualized targets from 2019 was 11 yards and his average completion distance was 10.1 yards. It’s worth noting that 25 of Pittman’s 42 receptions came 7 or less yards down the field. Of Pittman’s six receptions in these six games that came more than 30 yards down the field, you’ll see that quite a few of them came against poor coverage or mistakes in the secondary.

On his 42 total receptions in these six games, Pittman averaged 5.1 yards gained after the catch, which isn’t a bad number.

Pittman is no way considered a burner on the outside and that was backed up at the scouting combine by his 4.52-second 40-yard-dash time. His tape from these six games also don’t show us many contested catches. He was used a lot on out routes, slants and quick skinny post routes.

Pittman does appear to understand good route running basics and theory and he does a nice job of breaking back toward the quarterback on curl and comeback routes.

The contextualization of these six games doesn’t show Pittman to be a very dynamic player overall. Outside of a few nice deep receptions and nice runs after the catch, there is very little “WOW” in Pittman’s tape from these six games. He is a very consistent player on tape, however, and especially on the left side of the offense.