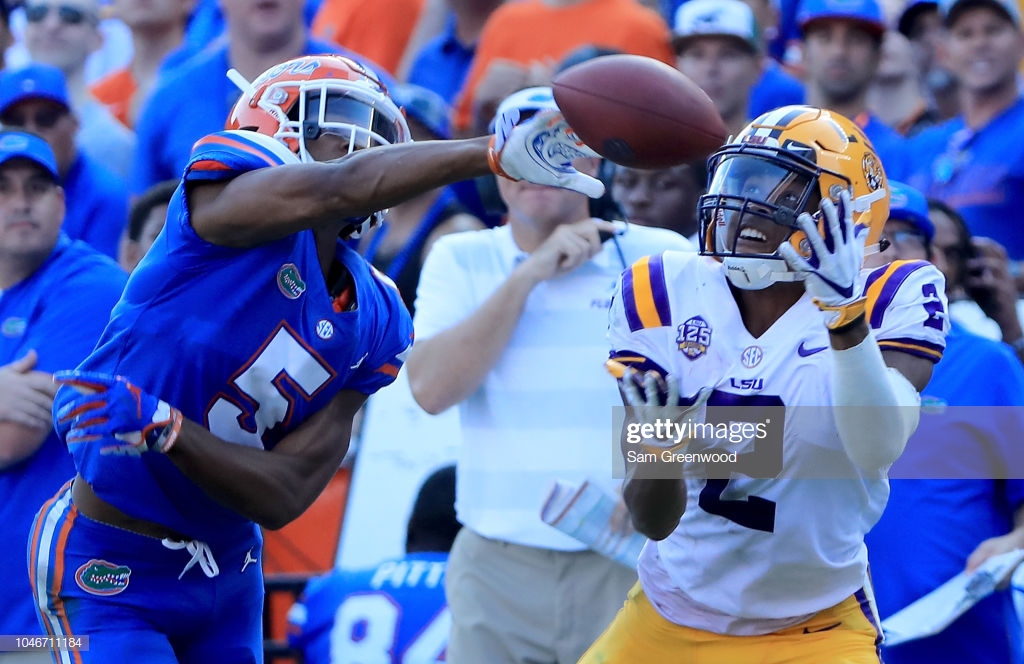 Wrapping up the final day from Indianapolis and the conclusion of the 2020 NFL Combine. To finish things off, the defensive backs worked out.

– Far down on the list of needs for Pittsburgh but still an impressive class and there’s always that chance they select one late on Day Three. For early round types, it’s fair to say Florida’s CJ Henderson had one of the best workouts. Whether you’re talking 40 time (4.39) explosion drills (37.5 inch vert, 10’7″ broad) or his on-field testing, showing quick feet and change of direction on a 6’0, 204 pound frame, he may be the second corner off the board when all is said and done.

– Three corners timed north of 4.6, a bad predictor for their NFL futures. That’s Mississippi State’s Cameron Dantzler (4.64), Washington’s Myles Bryant (4.62) and Florida State’s Stanford Samuels (4.65). Danztler seemed to have a better on-field workout while Bryant had a really terrible time for being a small guy and Samuels is a leggy corner who runs tall and is stiff in his transition.

– Good days for LSU’s Kristian Fulton and Notre Dame’s Troy Pride Jr. Fulton is rebuilding his stock after a bad championship performance while Pride Jr. is carrying over a strong showing at the Senior Bowl. Pride is especially explosive out of his pedal while Fulton is coordinated and does a nice job staying low. Plays under control.

– Some other random thoughts. Wake Forest’s Essang Bassey is a rocked up corner with excellent testing (4.46 40, 39.5 vert, 10’8″ broad) who may find a home inside at the next level. Penn State’s Jordan Reid needed to be faster in his pedal, Teryl Austin – running the drill – got on him for that. And it’s always a sin for players at the end of drills to screw up the instructions. That happened to Georgia Southern’s Kindle Vildor in the W drill who had to go through it twice.

– Bama’s Trevon Diggs didn’t work out but went through drills. Broadcast said he was a former receiver and he looks every bit of it, making light work of the gauntlet drill, which DBs are going through for the first time this year.

– Definitely an area the team should have interest in this class after ignoring it a year ago. Pittsburgh loves athletes at the position and there a couple who make sense. On paper.

– One guy whose Steelers’ stock took a hit? Notre Dame’s Jalen Elliott. I liked his on-field workout and what he did in Mobile but a 4.8 40 is UGLY. Reminds me of Mike Bell out of Fresno State last year, who was ultimately undrafted.

– The small schools stole the show. Lenoir-Rhyne’s Kyle Dugger and Southern Illinois’ Jeremy Chinn. Couple of 215+ pound guys with insane workout numbers. Dugger running 4.49 with a 42 inch vert and 11’2″ broad. Chinn at a 4.45 40, 41 inch vert, 11’6″ (!!!) broad. Both were already making money coming off the Senior Bowl and should be Top 75 picks come the draft. Their size/speed/versatility combination is what the NFL covets these days.

– Really nice workout for Antoine Winfield Jr. 4.48 40 and one of the most fluid looking players in drills.

– Was hoping Iowa’s Geno Stone would break into the 4.5’s. His 4.62 won’t earn him high marks on the Steelers’ scouting report. Nor will his 33.5 inch vert and 9’8″ broad. He showed stiffness in drills, flat out falling down trying a speed turn. Like his tape, like his physicality, don’t know if Pittsburgh is going to like him as much.

– Bummed both Cals’ Ashtyn Davis nor Texas’ Brandon Jones have been able to do much since their college seasons ending. Davis didn’t end up working out in Mobile due to injury, though he attended, while Jones’ pulled out of the Senior Bowl entirely due to injury. Neither worked out yesterday in Indy.