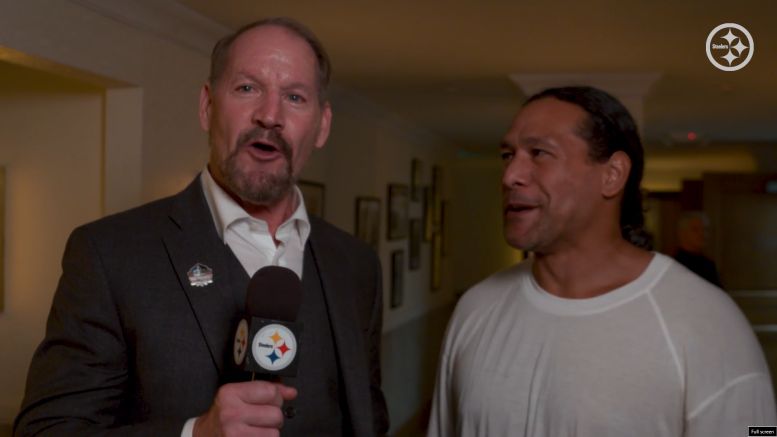 Who knew back in 2003 that when Bill Cowher’s Pittsburgh Steelers traded up in the first round of the draft to take safety Troy Polamalu out of USC, that the pair would be going into the Hall of Fame together 17 years later? It’s the first time in the modern era that a player and the coach who drafted him and for whom he played is being enshrined in the same class.

With the two going in together, they got a chance to talk, and Cowher did an informal interview with Polamalu for the team’s website. One of the topics that they discussed was the variety of roles the defensive coaches threw at him right away.

“Without a doubt, my rookie year you definitely didn’t give me any confidence”, he joked. “This is what actually defined it for me: when Mr. Rooney came to me (toward the end of the year), he goes, ‘you’re not doing as bad as they say you are’. I was like, ‘oh my god, what are they saying about me, Mr. Rooney?’”.

.@CowherCBS & @tpolamalu speak about their time in Pittsburgh, their relationship on and off the field, their election into the @ProFootballHOF and more. pic.twitter.com/itJPpes60X

That’s an amusing anecdote about a time seemingly long forgotten, but there are those who might not remember that Polamalu did not play as the caped crusader he came to be right out of the gates. He was a role player as a rookie, making no starts. He recorded 48 tackles with a forced fumble and four passes defensed, but some were already trying to call him a bust.

He was a 16-game starter with five interceptions by year two and a Pro Bowler, however, much like Minkah Fitzpatrick this past season for the Steelers, who is shaping up to be clearly the best safety the team has had since Polamalu retired.

Though he obviously fell into the role of strong safety, Polamalu was a player who would move all over the field. He would line up in single coverage plenty of times, able to function as easily as a free safety as strong safety. Late in his career, he even played the moneybacker role out of the dime defense.

It’s sometimes just worth remembering that not even Hall of Famers necessarily look the part from the first time that they step on a field. There is a constant pressure for rookies to perform immediately and do so at a high level, but that’s not always realistic.

And the more you give up to get a player, the more pressure there is. Polamalu was traded up for. Rookie Devin Bush faced similar pressure, but he was fortunate to have more success, and more tangible stats to show for it, in year one. Terrell Edmunds and other first-round picks didn’t get off to as fast a start. Some flamed out, but others turned into great players, while the rest, we should still allow some time.