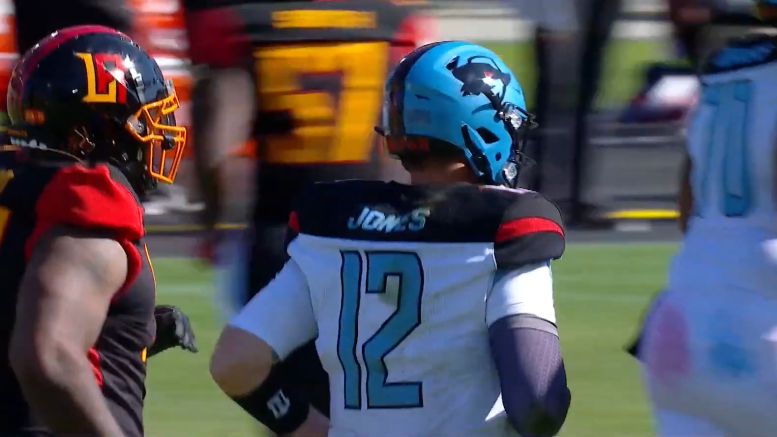 A pair of former Pittsburgh Steelers quarterbacks were victorious during the XFL’s third week over the weekend. Or at least I thought, as I’ll explain later. While Cardale Jones of the seemingly hottest team in the league, the DC Defenders, took a major step back, PJ Walker has continued to look like the best player in the eight-team league.

These are not the former Steelers quarterbacks, of course. The first would be Landry Jones, a 2013 fourth-round pick who spent five seasons with the team. After missing the opener with a knee injury, which his Dallas Renegades lost, he has won their past two games, and he played better in his second start.

A week after throwing two interceptions to one touchdown, he…threw two interceptions again, but this time he also had three touchdown passes. Overall, he completed 30 of 41 pass attempts for 274 yards, which included a 65-yard completion. He ranks fourth in the league in passing yards despite missing a game.

Josh Johnson is third in the XFL with five touchdown passes, behind Walker’s 10 and six from Brandon Silvers, who was one of the best quarterbacks of the Alliance of American Football. Johnson was to partake in the AAF last season, but he was signed to an NFL contract. The XFL doesn’t allow players to break their contracts in that fashion.

Johnson, it frankly just occurred to me, is not Jerrod Johnson, the quarterback who did play for the Steelers in the preseason back in 2012. Quite honestly, I’ve been confusing the two for years now, and I’ve only realized just now that I’ve probably mentioned Josh Johnson multiple times in the past year as a former Steelers quarterback.

But the greater point is, the Steelers wanted both of them to be Steelers, recently. After Ben Roethlisberger went down last season, they tried to re-sign Jones, who of course would have known their system.

While Johnson never played for them before, they also called about him after the XFL turned them down for Jones. They were similarly turned down. While either quarterback only would have been brought on to serve as depth—otherwise they would have been on the roster already—both are on the team’s rolodex, so to speak.

In fact, we have already heard from general manager Kevin Colbert that, as with the AAF, they are watching the XFL for talent. They ended up signing half a dozen players from the AAF, one of whom started the season opener, and another who ended the year on the roster. The latter, J.C. Hassenauer, still remains with the team.