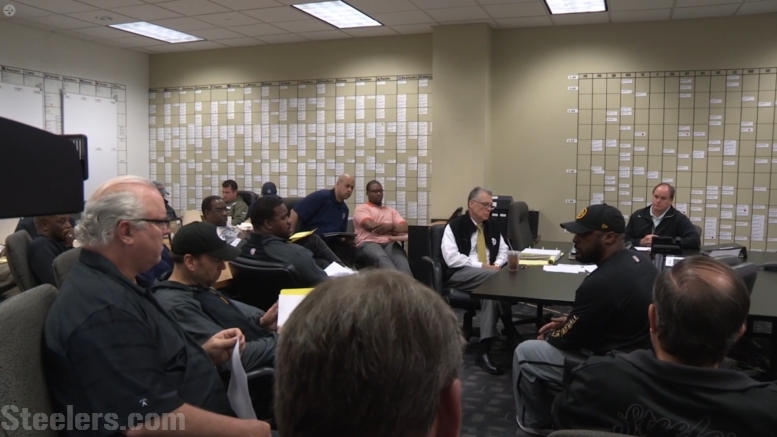 While the Pittsburgh Steelers will be scouting along with everybody else in Indianapolis during this week, they are one of a couple of teams who will be doing so from a bit of a different perspective. They won’t be picking at all in the first round, and in fact won’t be making a selection until about 50th overall.

Earlier this month, general manager Kevin Colbert spoke to Missi Matthews for the team’s website about a diversity of topics, including, for the first time in literally over 50 years, the team’s lack of a first-round draft pick.

At the time, he told Matthews that it doesn’t really change their approach to the draft, that they’re still going to scout the same way. The only real difference would be that they would have three hours to just sit and watch tv during the draft when they otherwise would be preparing to make a draft pick.

Of course he was joking. The Steelers won’t be idle in the first round. They will do their due diligence on the phone, and pursue the possibility of trading up, as they always do, even though they’ve only done it three times in the past two decades. It helps that the most recent was last year.

Colbert did admit, according to Joe Rutter, that there is one thing that will be different about drafting so late. “Even when we were picking 32nd, we still were looking and evaluating the players we thought were going 1 through 10. That won’t change this year”, he said. “When we get into our mock draft scenarios, and we don’t have that first-round pick, we’ll probably take 20 guys out and say there’s no way they are getting to 18 in the second round”, he added.

So that is a little different. The team won’t be picking until around 20 picks into the second round, so they haven’t ever dealt with drafting so far back before. They’ve never just completely tossed out names like that, even if it might not necessarily have been realistic. In 2018, they were still factoring in a guy like Minkah Fitzpatrick. This year, they would know they’d have no conceivable shot at getting him.

Of course, Fitzpatrick is who the Steelers got for their first-round pick. And he is young and successful and bound to the team for three more years on the relative cheap. So it’s hard to ask for much more than that from the 18th-overall pick.

Of the draft selections they have made going on several years now, the only player I would really argue who is or was better than Fitzpatrick is currently would be T.J. Watt, and that largely has to do with the significance of his role in the defense.