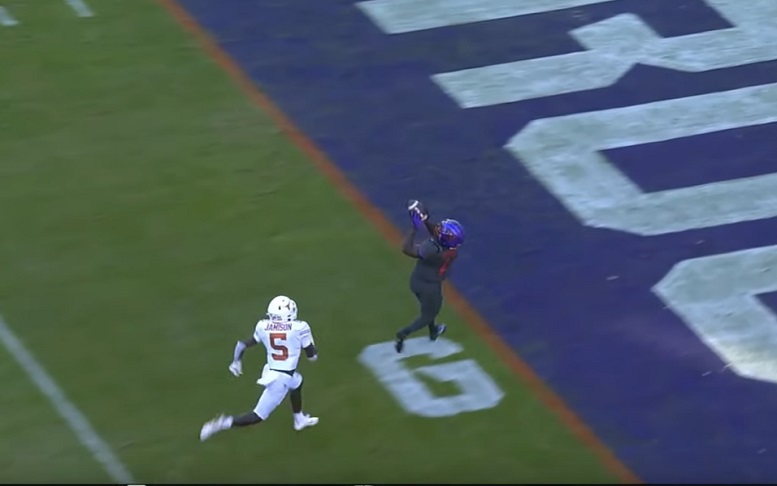 The 2020 NFL Scouting Combine will get underway next week in Indianapolis, IN and this year’s group of wide receivers figures to be a deep and entertaining one. One of this year’s underclassmen wide receivers, Jalen Reagor out of TCU, has received quite a bit of buzz the last several weeks and especially when it comes to him potentially being a 2020 draft target of the Pittsburgh Steelers. Just ahead of the combine getting underway, I figured it would be a good time to contextualize a few of Reagor’s games from the 2019 season for all to see.

In total, I contextualized five of Reagor’s games from last season and they were against Purdue, Texas, Oklahoma State, Oklahoma, and West Virginia. In those five games, Reagor was targeted 30 times in total and he caught 18 passes for 278 yards and a touchdown.

Reagor’s average intended depth per target on these 30 contextualized plays was 15.3 yards and his average depth per completion was 11.8 yards. It’s worth pointing out that while just four of Reagor’s 18 total completions in this contextualization from 2019 were caught more than 15 yards down the field, he would/should have had a few more deep completions had passes been on target. On a few of those incompleted deep pass targets you’ll see below, Reagor had his man beat by a step or more.

In these 18 completions below that Reagor registered in 2019, you’ll see a few that required him to catch way above his head with a few of those qualifying as contested catches. While it’s a relatively small sample size of receptions, Reagor averaged 3.7 yards after the catch. Small sample size and all, it felt like a true reflection of his abilities when it comes to after the catch.

While this contextualization of Reagor does include 30 total targets, the young wide receiver doesn’t run a very diverse route tree within these. He also registered two ugly drops in these 30 contextualized targets.

What’s not shown in this contextualization of Reagor is that he was used several times behind the line of scrimmage on designed runs. Additionally, he had some success last season as a punt and kickoff returner due to his above average open-field abilities.

In 2019, Reagor caught 43 passes for 611 yards and five touchdowns. That stat-line, however, was down from his 2018 season in which he registered 72 receptions for 1,061 yards and nine touchdowns. Toughly 38 percent of all Reagor’s college receptions resulted in gains of 15 yards or more and that speaks volumes concerning his big-play ability.

Based on just the contextualized targets below, Reagor should register nice drill numbers next week at the scouting combine. He could wind up being one of the fastest players in Indianapolis this year.

While Reagor’s 2018 college tape is certainly worth exploring as we continue through the pre-draft process, his 2019 game against Oklahoma State is probably the truest reflection of the kind of wide receiver he is as he exits college.