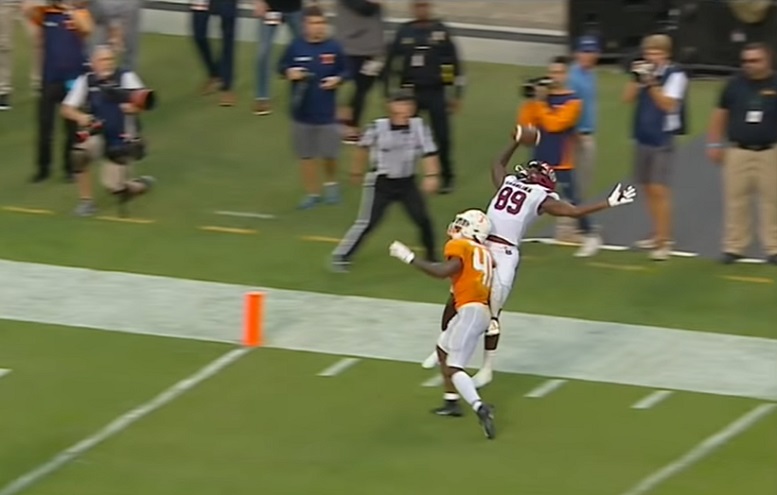 On the heels of the Pittsburgh Steelers apparently hiring Bryan McClendon to be their new wide receivers coach, there’s now a lot of buzz on this Sunday about a wide receiver he coached at South Carolina for the last four years, Bryan Edwards, who caught 234 total passes for 3045 yards and 22 touchdowns during his college career. With that buzz being heavy on this Sunday, I figured it would be a perfect time to contextualize a lot of Edward’s targets from the 2019 season.

In total, I contextualized four games that Edwards played in 2019 and all four were against SEC teams. Those four teams were Tennessee,, Florida, Alabama and Georgia and in total, Edwards had 41 targets in those four contests and caught 30 of those passes for 318 yards and a touchdown.

After contextualizing each target, the data shows that Edwards’ average intended air target distance was a mere 7.85 yards. Additionally, his average completed air yards distance in these four games was just 5.57 yards. Edwards had 151 yards gained after the catch on these 30 receptions with quite a few of those catches originating behind the original line of scrimmage.

Edwards registered 71 receptions in total during the 2019 season so this four-game contextualization accounts for a little more than 42% of them. The fact that Edwards averaged 11.5 yards per reception in 2019 can easily lead one to believe that besides maybe a few extra deep receptions, we would get the same kind of statistical target results if we contextualized the other 41 receptions of his.

Was Edwards used the same way in 2018, when he caught 55 passes for 846 yards and seven touchdowns? With me not finding the stat results I was expecting in this four-game contextualization, I firmly believe that at least four of Edward’s 2018 games needs to be contextualized as well to see if most of his receptions were once again well inside 10 yards of the original line of scrimmage.

Edwards will check a lot of boxes when it comes to the Steelers because of his age, playing time, reception totals and the fact that he was a team captain and played in the SEC. That said, he might be overvalued by many because of his high catch totals in college. Instead, Edwards might be more of a fifth-round target than a third-round option like many seemingly have him as currently.